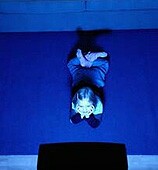 Often these mishaps aren’t witnessed by adults, which indicates a lack of awareness of the dangers TV sets can pose to kids if the sets aren’t securely mounted, the researchers added.

“These injuries are increasing around the world,” said lead researcher Dr. Michael Cusimano, of the Dalla Lana School of Public Health at the University of Toronto.

Between 2011 and 2013, an average of more than 15,000 kids a year were treated in emergency departments for injuries involving TVs, or TVs and furniture, according to the U.S. Consumer Product Safety Commission (CPSC). From 2000 to 2013, there were 279 deaths related to such incidents, the CPSC said.

“Caregivers need to be aware of this hidden hazard that exists in the home and take measures to prevent accidents,” Cusimano said. “A TV can crush a child.”

The report was published online Sept. 29 in the Journal of Neurosurgery: Pediatrics.

Dr. John Wellons, a professor of neurological surgery at Vanderbilt University Medical Center in Nashville, said these injuries can be severe, crushing the skull and causing brain damage.

Wellons, who co-authored an accompanying journal editorial, added, “People who buy TVs need to secure them in ways that children don’t get injured by them.”

“Don’t assume that the TV is safe if you have a toddler in the home,” Wellons said.

For the study, Cusimano and his colleague Nadine Parker, from the Injury Prevention Research Office at St. Michael’s Hospital in Toronto, analyzed data from 29 previously published studies. The studies clearly showed that most head injuries from toppled TVs occur to toddlers, and many of these injuries are severe and sometimes fatal, Cusimano said.

As TVs have become larger and cheaper, injuries have been increasing, he said. Most of these injuries (84 percent) occur in the home, and more than three-quarters happen when parents or other caregivers aren’t watching, the research revealed.

Often TVs fall as kids climb on furniture to get a toy or other attractive item, Cusimano said. In many cases, TV sets are on top of dressers or other pieces of furniture that weren’t designed to hold a TV, he added.

Older children often overturn TVs as they collide with the stand or furniture on which the set is placed, Cusimano said.

Cusimano and Parker said that most children injured are too young to know the risks posed by TVs and are also uncoordinated, increasing the odds of an accident. In addition, because the kids are short, head injuries are more likely as the TV falls, they said.

The CPSC recommends the following to protect your kids from possible TV injuries:

It seems these accidents should be easy to prevent, Pena said. “Not putting a TV on a shelf or piece of furniture would prevent so many of the awful injuries,” she added.