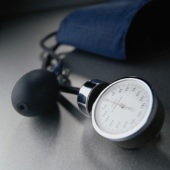 People who survive a brain hemorrhage, also known as a bleeding stroke, may be at higher risk for another one if they don’t control their blood pressure, a new study warns.

“Survivors are at high risk for recurrence and [the findings] support the hypothesis that aggressive blood pressure control may reduce this risk substantially,” wrote a team led by Dr. Jonathan Rosand of Massachusetts General Hospital in Boston.

The findings are published in the Sept. 1 issue of the Journal of the American Medical Association.

While rarer than “blockage” type strokes that involve a clot, bleeding strokes are “the most devastating and least treatable form of stroke,” according to Dr. Stephan Mayer, director of neurocritical care at Mount Sinai Health System in New York City.

Mayer, who was not involved in the new study, said that “we have known for decades that untreated high blood pressure is the most important cause of bleeding into the brain.”

In their research, Rosand’s team tracked outcomes for more than 1,100 people who suffered an intracerebral hemorrhage — a type of stroke in which bleeding occurs directly into the brain.

All of the patients survived at least 90 days. They were followed for up to 37 months and had their blood pressure checked at three, six, nine and 12 months, and then every six months.

During the follow-up, 146 recurrent bleeding strokes were recorded among the patients.

The rate of a second hemorrhage was higher among those whose blood pressure was not under control, the study showed. In fact, the higher the patient’s blood pressure, the greater his or her risk of recurrence, the researchers found.

Another expert agreed that long-term blood pressure control is imperative in preventing a second bleeding stroke.

Randomized clinical trials are needed to assess the benefits and risks of tighter blood pressure control in patients who have survived this type of stroke, they added.

“Survivors of brain bleeds due to high blood pressure must have their blood pressure strictly controlled for the three consecutive years after surviving the cataclysmic event, in order to maximally reduce their odds for a second bleed,” said Dr. Gregory Kapinos, a neurointensivist at the Center for Neurocritical Care at North Shore University Hospital in Manhasset, N.Y.

He added that this remains true “whether the first bleed was at the edges of the brain, which is more likely to recur and more disabling, or deeper inside the brain.”

“Bottom-line is the closer you are to a 90/60 [reading] for your blood pressure after a brain bleed, the better off you are,” Kapinos said.

Things you can do to help manage your blood pressure include getting a doctor’s check-up at least once every three to six months, eating a low-salt diet, and exercising, he added.

The American Heart Association has more about hemorrhagic strokes.