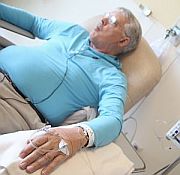 People with cancer could be suffering silent, unseen heart damage due to their malignancy, a new study from Austria reports.

Those chemical indicators for heart disease increased with the severity of a person’s cancer, and were strongly associated with a higher risk of death for these patients, the researchers said.

The findings suggest cancer could be doing damage to heart tissue, even though the person may not be showing clinical evidence of heart disease, the researchers concluded.

Dr. Ana Barac, chairwoman of the American College of Cardiology’s Cardio-Oncology Section, said the study could be “paradigm changing” in the way doctors view cancer and heart disease.

Those walls have crumbled slightly in recent years, as more has been learned about the toxic effects that chemotherapy for cancer can have on the heart.

As a result, cancer doctors often will check for chemical indicators of heart disease before putting a patient on chemotherapy, to make sure the cancer treatment won’t cause potentially fatal heart disease, she said.

But the patients in this study had high levels of these indicators before ever receiving chemotherapy, and their levels grew worse as their cancer progressed.

“That’s an eye-opening thing,” Barac said. “They’re saying there’s a cross-talk between cancer and cardiovascular status. There’s a biology there we need to work more to understand.”

The study, published Sept. 28 in the journal Heart, focused on 555 people treated for cancer at Vienna General Hospital in Austria.

Before the patients began any treatment that might have damaged their heart, researchers performed a panel of tests to check for signs of heart disease in their blood. The tests looked at blood levels of several heart-related hormones, some proteins associated with inflammation, and a chemical called high sensitive troponin that regulates heart muscle contractions.

Troponin, for example, is used by doctors to test whether a person has suffered an undetected heart attack. “It’s something that really only shows up when there’s damage to the heart,” said Dr. Ann Bolger, a professor and cardiologist with the School of Medicine at the University of California, San Francisco.

The researchers tracked the patients’ progress for an average of two years. During the monitoring period, about a third of the patients died.

Analysis of their blood samples showed that levels of troponin and all the hormones measured rose in tandem with cancer severity, and in some cases were 100 times higher than would be expected, the study authors reported.

All the indicators were significantly associated with an increase in the person’s risk of death from any cause, which rose between 21 percent and 54 percent, depending on the specific chemical indicator.

“That does make you think that finding these things is telling us that the heart is impacted by the cancer,” Bolger said.

There are several ways that cancer could indirectly damage the heart without spreading to it, experts said.

For example, the body might be trying to fight off the cancer by increasing inflammation. “One of the costs of mounting that inflammatory response is that it triggers some of the bad things we know it can do in the heart,” Bolger said.

Cancer might also directly harm the heart by releasing toxic chemicals that damage the muscle, said Dr. Alexander Lyon, a senior lecturer in cardiology at Imperial College London and a consultant cardiologist at the Royal Brompton Hospital, also in London.

“In the same way that the body’s skeletal muscle wastes away with advanced cancer, perhaps the heart muscle is also affected,” said Lyon, who wrote an editorial accompanying the article.

But there could be other explanations for telltale signs of cancer-related heart damage. These hormones and body chemicals might be released as part of the creation of tiny new blood vessels necessary for tumor growth, for example, said Barac, the Washington, D.C., cardiac expert.

Regardless, these results show that it is important to assess the heart health of cancer patients, and put them on medications to protect their hearts from damage caused by either their cancer or the treatment they receive for it, the experts said.

“It would be great if we could keep people from having this process go on, because developing heart failure on top of having to fight cancer is extremely difficult for the patients,” Bolger said. “We’d do anything to avoid that.”