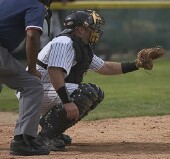 Foul balls and flying bats cause most of the injuries sustained by baseball catchers, not home-plate collisions, a new study finds.

“While recent rule changes were implemented to prevent catcher injuries, the focus of these changes is not supported by the findings of our study,” study first author Dr. Kelly Kilcoyne, an orthopedic surgeon at William Beaumont Army Medical Center in El Paso, Texas, said in a university news release. “Further investigation and in-depth analysis can inform optimal strategies to mitigate and prevent injuries among this particular category of players.”

The researchers worked with two Baltimore Orioles trainers to analyze all catcher injuries during Major League Baseball games between 2001 and 2010.

A total of 134 injures were documented. Of these, 114 did not involve a collision with a base runner, the researchers report in a recent issue of the American Journal of Sports Medicine.

This means that fewer than 15 percent of catcher injuries were the result of contact with another player. Moreover, these run-ins usually required less recovery time than other types of injury, the researchers said.

Overall, catchers spent an average of 50 days on the disabled list. Non-collision injuries were associated with an average recovery time of 53 days, compared to 39 days for colliding with another player.

Nineteen injuries involved recovery periods of more than 100 days, but none of them involved a run-in between a catcher and a base runner.

The most common cause of non-collision injuries among the catchers was a blow to the head by a bat or foul ball. Overall, 28 percent of catcher injuries involved the leg, 23 percent involved the knee and 23 percent affected the shoulder.

During the study period, catchers sustained 11 concussions. Only two were the result of a collision, the study found.

In 2014, Major League Baseball implemented rule changes to reduce collision injuries. The revisions require catchers to allow base runners a clear path to home plate. And runners are not allowed to stray off of those paths to collide with a catcher on purpose.

“Our results indicate that while well-intended, the league’s current efforts to reduce contact injuries among catchers may be overlooking other types of trauma among this subgroup that tend to inflict more physical harm and lead to more loss of game time,” study senior investigator Dr. Edward McFarland, a professor of orthopedic surgery, said in the news release.

The American Academy of Orthopaedic Surgeons provides tips on how to prevent baseball injuries.