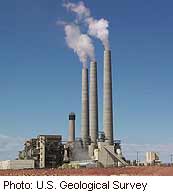 Coal and coal ash from the Illinois basin had the highest levels of radioactivity, followed by the Appalachian basin and the Powder River basin in Montana and Wyoming.

The study was published recently in the journal Environmental Science & Technology.

Currently, coal ash is unregulated in the United States and is stored in coal-fired plants’ holding ponds and landfills. The Environmental Protection Agency’s first-ever regulations on coal ash disposal are set to begin in October, the researchers said.

“Until now, metals and contaminants such as selenium and arsenic have been the major known contaminants of concern in coal ash,” said study co-author Avner Vengosh in a university news release.

“This study raises the possibility we should also be looking for radioactive elements,” said Vengosh, who is a professor of geochemistry and water quality at Duke’s Nicholas School of the Environment.

The U.S. Environmental Protection Agency has more about coal ash.