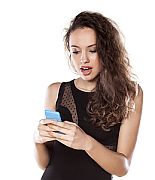 Teens who feel a round-the-clock compulsion to participate on social media sites like Facebook or Twitter may pay a price in lost sleep. They may also face a higher risk for depression and anxiety, new research suggests.

“Adolescence can be a period of increased vulnerability for the onset of depression and anxiety, and poor sleep quality may contribute to this,” said study co-author Heather Cleland Woods, a psychology administration teacher at the University of Glasgow in Scotland. “It is important that we understand how social media use relates to these.”

The findings are scheduled for presentation Friday in Manchester, England, at a British Psychological Society meeting. However, until the data and conclusions are published in a peer-reviewed medical journal, the research should be considered preliminary.

Approximately 90 percent of teens worldwide use social media, the researchers said in background notes. Facebook alone counts almost 1.5 billion users, and Twitter, more than 300 million. Evidence is increasingly revealing a link between social media use and well-being, particularly in the teen years, Woods and co-author Holly Scott, also from the University of Glasgow, said.

The 467 study participants were questioned about their social media habits, during the day and around bedtime. The teens also underwent mental health testing, and were asked how much pressure they felt to be available to respond to incoming social media communications, and how much anxiety they felt when they couldn’t do so — a state of mind known as “emotional investment.”

The result: The more teens engaged with social media and the more they were emotionally invested in site participation, the greater the risk for impaired sleep, poor self-esteem, depression and/or anxiety.

Jumping online at night was linked to a “significantly” higher risk for bad sleep quality, independent of other factors that might interfere with sleep, such as anxiety, depression or low self-esteem, the study found.

“While overall social media use impacts on sleep quality, those who log on at night appear to be particularly affected,” Woods said in a British Psychological Society news release. “This may be mostly true of individuals who are highly emotionally invested. This means we have to think about how our kids use social media, in relation to time for switching off.”

Scott Campbell, an associate professor of communication studies at the University of Michigan, made the point that teenage engagement with social media “is not all bad.”

“There is another side to this story, and that is that kids are getting a lot of social support through social media,” said Campbell, who was not involved with the study.

Still, “research has also shown that there is definitely a causal path between social media use and lower well-being in general,” he added. “And that’s not just for teens. Teens may be more vulnerable to these negative effects, but this is a problem for people of all ages.”

However, Campbell said research has shown these negative effects tend to arise in specific circumstances, such as when people use social media passively — by compulsively browsing or lurking about, for example. “More active use, such as posting or communicating, hasn’t been linked to this issue of poorer well-being,” he said.

The social media dynamic lends itself to the chicken-and-egg question, Campbell said.

“Teens who may be feeling lonely already and are looking for a little boost may then turn to social media, in which case they’re bringing their sense of low self-worth with them to the table,” he said. “That happens. It can definitely go in both directions. In the end, it’s a pretty complicated situation.”