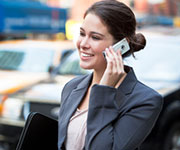 Spending too much time on your cellphone can take a toll on your love life, a new study finds.

Baylor University researchers surveyed more than 450 American adults to define and gauge the impact of what they called “phubbing” (partner phone snubbing). That’s when people use or get distracted by cellphones while in their partner’s company.

“What we discovered was that when someone perceived that their partner phubbed them, this created conflict and led to lower levels of reported relationship satisfaction,” study co-author and marketing professor James Roberts said in a university news release.

The study will be published in the January 2016 issue of the journal Computers in Human Behavior.

People often assume that brief cellphone distractions are no big deal, but the survey indicates that’s not so, study co-author Meredith David, an assistant professor of marketing, said in the news release.

“Our findings suggest that the more often a couple’s time spent together is interrupted by one individual attending to his/her cellphone, the less likely it is that the other individual is satisfied in the overall relationship,” David said.

“When spending time with one’s significant other, we encourage individuals to be cognizant of the interruptions caused by their cellphones, as these may well be harmful to their relationship,” David added.

The findings are important given that cellphone use is so common, the researchers added.

“When you think about the results, they are astounding. Something as common as cellphone use can undermine the bedrock of our happiness — our relationships with our romantic partners,” Roberts said.

Mental Health America explains the importance of connecting with others.