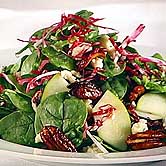 That’s the suggestion from a new study led by researchers at the U.S. National Institute on Aging (NIA).

The “results are quite intriguing,” study co-author Dr. Evan Hadley, director of geriatrics and clinical gerontology at the NIA, said in an agency news release. “They show that this degree of sustained calorie restriction can influence disease risk factors and possible predictors of longevity in healthy, non-obese people.”

The research included more than 200 healthy adults. The adults were young or middle-aged, and either at normal weight or slightly overweight. They were randomly assigned to either a calorie restriction group or to a control group who continued their regular eating habits.

Previous animal studies have shown that calorie restriction — taking in fewer calories while still getting essential nutrients — extends longevity and slows progression of many age-related diseases, the researchers said.

The participants in the calorie restriction group were given a target of 15.5 percent weight loss in the first year, the researchers said. To do that, the study volunteers would need to reduce their calorie intake by 25 percent. They were asked to keep their weight stable in the second year of the study.

The people in this group lost an average of 10 percent of their body weight in the first year, and maintained this weight loss over the second year. Even though the group did not achieve the weight loss target, it was the largest sustained weight loss seen in any dietary trial in non-obese people, according to the researchers.

The average 12 percent decline in calorie intake was far short of the 25 percent target, but the participants maintained calorie restriction for the entire two years of the study.

The people in the calorie restriction group didn’t have any of the changes in metabolism that were seen in previous animal studies. But they did have significant improvements in several predictors of heart disease, including a 6 percent decrease in total cholesterol, a 4 percent fall in blood pressure, and increased levels of “good” HDL cholesterol.

Calorie restriction also led to a 47 percent decrease in levels of C-reactive protein, a marker of inflammation linked to heart disease. Reduced insulin resistance, a risk factor for diabetes, was also seen.

However, some of the people in the calorie restriction group developed temporary anemia. Some also had larger-than-expected decreases in bone density, the study found. These findings highlight the importance of medical monitoring during calorie restriction, according to the study authors.

Hadley said it’s important to see if calorie restriction would offer additional long-term benefits. And he said it would be useful to learn if calorie-restricted weight loss offered more benefits than exercise-induced weight loss.

The study is in the September issue of the Journal of Gerontology: Medical Sciences.

The U.S. Food and Drug Administration explains how to make your calories count.