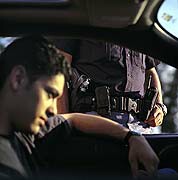 Just a bit of alcohol coupled with a distraction, such as a text message or changing a radio station, can double the odds of trouble on the road, new research suggests.

In simulated driving conditions, either alcohol or a distraction affected driving ability. But researchers found that the chances of impaired safe driving went up twofold when someone who had been drinking alcohol had to deal with a distraction while driving.

And, this was true even for people whose alcohol levels were below the legal limits for drunk driving, the study found.

The findings were published online recently in the journal Psychopharmacology.

“A clearer understanding of how common distractions impact intoxicated drivers, especially at blood alcohol concentrations that are currently legal for driving in the United States, is an important step to reducing traffic accidents and fatalities and improving overall traffic safety,” study co-author Mark Fillmore, from the University of Kentucky, said in a journal news release.

About 28 alcohol-related traffic deaths occur daily in the United States, the researchers said.

For the current study, 50 adult drivers participated in a six-minute driving simulation after having one drink. All were asked to take a virtual drive of nearly six miles through terrain that replicated a typical urban environment. During the test, drivers were monitored for how well they handled the steering wheel and how well they stayed in their designated lane.

During some of the tests, drivers also had to handle information that appeared in the form of red circles on the windshield of their virtual car. These distractions were similar to drivers receiving text messages or having to deal with dashboard controls, the researchers said.

The study authors pointed out that some lawmakers are thinking about lowering the legal alcohol limit for drinking and driving. The current limit is 0.08 percent alcohol concentration in the blood. Lawmakers are considering lowering the limit to 0.05 percent. However, lawmakers haven’t taken into account the potential effect of distractions combined with alcohol when considering new limits, the researchers added.

“With continuing advancements in technology and the omnipresence of distractions while driving, it is becoming increasingly important to study the interaction between alcohol and distraction on driving,” study co-author Nicholas van Dyke, also from the University of Kentucky, said in the news release.