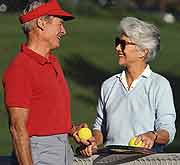 Regular exercise may help seniors’ minds stay as agile as their bodies, a new study finds.

The study included 100 adults, aged 60 to 80, who wore monitors to record their physical activity levels over one week. The participants also underwent MRI scans to measure blood oxygen levels and assess brain activity at rest.

Those who did regular moderate to vigorous exercise had more variable brain activity at rest than those who were less active, the investigators found.

“In a previous study, we showed that in some of the same regions of the brain, those people who have higher brain variability also performed better on complex cognitive [mental] tasks, especially on intelligence tasks and memory,” study co-leader Agnieszka Burzynska said in a news release from the University of Illinois at Urbana-Champaign.

She was a postdoctoral researcher at the university when she conducted the study, and is now a professor at Colorado State University.

The researchers also found that more-active seniors had better white matter structure in the brain than those who were less active. White matter fibers carry nerve impulses and connect different brain regions to each other.

The study was published recently in the journal PLoS One.

The findings suggest a new way to assess people’s brain health as they age, according to Burzynska.

“We want to know how the brain relates to the body, and how physical health influences mental and brain health in aging,” she said. “Here, instead of a structural measure, we are taking a functional measure of brain health. And we are finding that tracking changes in blood-oxygenation levels over time is useful for predicting cognitive functioning and physical health in aging.”

The U.S. National Institute on Aging has more about exercise and physical activity.