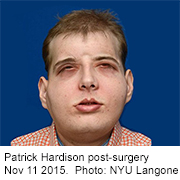 A 41-year-old volunteer firefighter from Mississippi now wears the face of a 26-year-old bike messenger from Brooklyn, after what doctors are calling the most extensive face transplant surgery ever performed.

The surgery involved removing the skin off Rodebaugh’s scalp, face and neck, along with the bone around the nose and chin, and then fitting the donated tissue to Hardison’s features and reconnecting facial nerves and blood vessels.

“The amount of tissue that was transplanted in Patrick’s face had never been transplanted before,” said Dr. Eduardo Rodriguez, chair of the Hansjorg Wyss Department of Plastic Surgery at NYU Langone, who led the transplant effort.

Hardison suffered horrific facial injuries back in September 2001, when a burning mobile home caved in on him as he searched for fire victims. He lost his eyelids, ears, lips and most of his nose, as well as his hair and eyebrows.

“The roof collapsed on Patrick, knocking down his helmet,” Rodriguez said during a media briefing Monday morning. “He felt the mask on his face was melting. He was able to hold his breath, close his eyes tight and jump out of a window.”

Hardison underwent more than 70 surgeries to try to rebuild his face, but skin grafts from his legs left his face a mass of smooth scar tissue. To go out without drawing attention to himself, he had to wear sunglasses, a baseball cap and fake ears.

When Rodriguez took over Hardison’s case, he coordinated with the LiveOnNY organ recovery organization for the greater New York metropolitan area to look for a donor face.

Hardison waited over a year for a donation, because finding a match was more complicated for his procedure than it would have been for another type of organ donation, said Helen Irving, president and CEO of LiveOnNY.

“For Patrick, we needed to find the perfect match,” Irving said. “Not only blood type, height, weight and age, but light skin color — the type of skin that sunburns easily — fair hair, similar bone structure, no facial trauma or tattoos, and most importantly no antibodies that would cause Patrick to reject his donor.”

That donation became available following a bicycle accident in July that left Rodebaugh in a coma from which he never awakened, Irving said.

“His mother immediately said yes” to the face transplant, Irving said. “There was no hesitation in her mind.” Other people also received Rodebaugh’s heart, liver, kidneys, eyes and bone marrow.

One team spent about 12 hours removing Rodebaugh’s face, which included cutting away the bone around the nose and chin, preserving facial nerves and tying off important arteries and veins, Rodriguez said.

In another room, a second team worked on Hardison for about eight hours to cut away a decade’s worth of scar tissue, built up from dozens of reconstructive surgeries. The team also removed bone around the nose and chin, so Rodebaugh’s face would perfectly fit Hardison, Rodriguez explained.

The final step involved attaching Rodebaugh’s face to Hardison, including screwing on the bones of the nose and chin as well as delicate surgery to make sure the nerves of the eyelids and other critical facial functions would be preserved.

Within a month, Hardison had begun to grow scalp and facial hair — the first since his accident, Rodriguez said.

Now, three months out from the surgery, doctors are cutting back on the immune-suppressive drugs that Hardison must take to keep his body from rejecting his new face, Rodriguez said.

“Patrick is now out of the hospital, and we have yet to see an acute rejection episode,” he said.