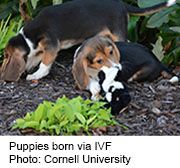 Researchers who were the first to create a litter of puppies through in vitro fertilization (IVF) say their breakthrough could benefit dogs, their wild cousins and even people.

With a combination of IVF and gene editing, it may be possible to eliminate inherited diseases in dogs. Inbreeding has made such diseases a major problem in purebred dogs. For example, Golden retrievers are at high risk for lymphoma and Dalmatians have a gene that puts them at risk for blockages from urinary stones, the researchers explained.

“Since the mid-1970s, people have been trying to do this in a dog and have been unsuccessful,” Alex Travis, an associate professor of reproductive biology at Cornell University’s College of Veterinary Medicine, said in a university news release.

The researchers said they made two significant changes in the IVF process to achieve fertilization rates of 80 percent to 90 percent.

The study was published online Dec. 9 in the journal PLoS One.

These findings may also be used to help endangered species of wolves and other wild cousins of dogs, and to preserve rare breeds of show and working dogs, according to the researchers.

The investigators also pointed out that dogs and humans share hundreds of similar genetic disorders. The successful use of IVF to create a litter of puppies means that dogs now offer a “powerful tool for understanding the genetic basis of diseases,” Travis said.

The U.S. Centers for Disease Control and Prevention has more on assisted reproductive technology.