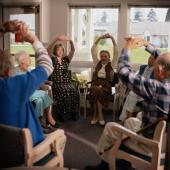 The analysis of data from 188 countries found that life expectancy for both sexes increased from just over 65 years in 1990 to 71.5 years in 2013, while healthy life expectancy rose from almost 57 years to slightly more than 62 years.

The findings regarding healthy life expectancy versus total life expectancy mean that people are living more years with illness and disability, according to the authors of the study published Aug. 27 in The Lancet.

“The world has made great progress in health, but now the challenge is to invest in finding more effective ways of preventing or treating the major causes of illness and disability,” study author Theo Vos, a professor at the Institute for Health Metrics and Evaluation at the University of Washington in Seattle, said in a journal news release.

In 2013, Japan had the highest healthy life expectancy (73.4 years), while Lesotho, in southern Africa, had the lowest (42 years).

The rise in overall life expectancy is due to significant declines in illness and death caused by HIV/AIDS and malaria, the researchers said, along with major advances in combating infectious diseases, nutritional deficiencies, and mother and baby health problems.

Health loss from HIV/AIDS rose more than 341 percent between 1990 and 2013, but fell by nearly 24 percent since 2005 due to an international focus on fighting the disease, the study found.