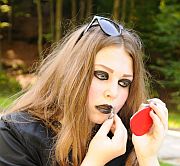 THURSDAY, Aug. 27, 2015The dark look associated with Goths may not be all show: Teens in this subculture appear more prone to depression and self-harm than their peers, researchers report.

Fifteen-year-olds who strongly identified as Goth — recognized by their distinctive black clothes, white and black makeup and black hair — were three times more likely to be depressed at 18 compared with teens who did not identify as Goth, the British researchers found.

And they were five times more likely to report self-harming behaviors such as cutting or taking an overdose of pills as non-Goth teens, according to the study published Aug. 27 in The Lancet Psychiatry.

“Our study does not suggest that being a Goth causes depression or self-harm, but rather that some individuals within this subculture may be particularly vulnerable,” said lead researcher Lucy Bowes, an associate professor of experimental psychology at the University of Oxford.

“Parents whose children identify with this subculture need not be concerned,” she said. “The majority of Goths were not depressed and did not self-harm.”

Moreover, she cautioned that the study is observational, and cannot prove that Goth identification causes psychiatric ills.

“Our study cannot tell us why Goths are more likely to be depressed or harm themselves,” Bowes said. “It could be that youths who feel isolated from mainstream society are attracted to the Goth community — traditionally very accepting of marginalized individuals — and that this isolation from the mainstream could be conferring the risk.”

The Goth subculture began in post-punk England during the early 1980s. The alternative clothing and music linked to the movement are now recognized worldwide.

For the study, Bowes and colleagues collected data on nearly 4,000 teens who took part in a long-running British study of parents and children. At age 15, participants gave information on self-harm, depressive mood and any Goth identification. They were also asked whether they identified with other subcultures, such as sporty, popular, skateboarders, antisocial, loners, “keeners” (eager-beaver types) and “bimbos.”

At age 18, they answered questions about depression and self-harm.

Skaters (skateboarders) and loners also had a higher risk for depression and self-harm, but the association was strongest for Goths, the researchers found. Young people who considered themselves sporty were least likely to be depressed or harm themselves at 18.

The findings held up even after the researchers took into account other factors, such as early emotional and behavioral difficulties, psychiatric disorders, history of bullying and the mental health of mothers, they said.

Rory O’Connor, director of the suicidal behavior research laboratory at the University of Glasgow, said it’s important to try to understand how and why this group of young people is at increased risk.

“We also don’t know whether these young people are less likely to seek help, because if it is the case that they are more reluctant to seek help when distressed, it may be difficult to reach this vulnerable population,” said O’Connor, co-author of an accompanying journal editorial.

Dr. Barbara Pena, research director at the emergency department in Nicklaus Children’s Hospital in Miami, added that depression and self-harm are not unique to Goth teens.

These problems are seen among teens across the board, Pena said. “We are seeing more cutting, more suicides than 10 years ago,” she said.

Pena thinks the Internet and social media contribute to this behavior.

“Parents shouldn’t freak out if their teen becomes a Goth,” Pena added. “Is it better to be an outlier and not have friends or have a community like you?”

Girls.gov has more about teenage self-harm.