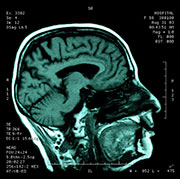 This type of brain damage may ultimately undermine the ability to think clearly, make decisions and control emotions, the scientists explained.

The finding is based on a small study involving 30 people whose brains were scanned using a highly sensitive imaging technology known as DTI, or diffusion tensor imaging. DTI is an enhanced form of MRI.

Among the study participants, half had high blood pressure and half did not.

“We already have clear ways to explore the damage high blood pressure can cause to the kidneys, eyes and heart. We wanted to find a way to assess brain damage that could predict the development of dementia associated with vascular diseases,” senior study author Daniela Carnevale said in a news release from the American Heart Association.

In the study, standard MRI scans did not detect any brain abnormalities among the participants. In contrast, using the advanced DTI scans, the investigators found signs of nerve fiber damage in the brains of patients with high blood pressure. The damage seen would typically affect nonverbal function, emotional control, decision-making abilities and the ability to focus, they explained in the news release.

In addition, the high blood pressure patients also fared “significantly” worse on thinking tests, while the healthy volunteers did not display signs of impaired thinking or memory during testing, the researchers said.

That said, there was no evidence that the damage seen actually harmed verbal function or the ability to carry out daily routines. The study was only able to show an association, and not a cause-and-effect relationship.

Carnevale, an assistant professor at the Neuromed Institute at Sapienza University in Rome, is scheduled to present the findings Thursday at the American Heart Association’s High Blood Pressure Conference in Washington, D.C.

Research presented at medical meetings should be viewed as preliminary until published in a peer-reviewed journal.