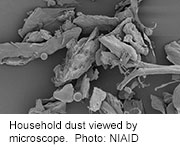 You’ve got a lot of unsuspected roommates: A new study finds that ordinary house dust contains thousands of species of bacteria and fungi.

The researchers analyzed dust from about 1,200 homes across the continental United States, and found that the dust in each home contained an average of more than 5,000 species of bacteria and about 2,000 species of fungi.

“Every day, we’re surrounded by a vast array of organisms in our homes, most of which we can’t see,” study co-author Noah Fierer, associate professor in the department of ecology and evolutionary biology at the University of Colorado at Boulder, said in a university news release.

“We live in a microbial zoo, and this study was an attempt to catalog that diversity,” he added.

“Geography is the best predictor of fungi in your home,” Fierer said. “The reason is that most fungi blow in from outdoors via soil and leaves.”

For example, a home in the upper Midwest has different fungi than one in the Southeast.

By analyzing the dust samples, the researchers could predict which homes had pets such as cats and dogs, and even the gender ratio of the people who lived there. For example, homes with only males have a different bacterial population than homes with both males and females.

The study was published Aug. 26 in the journal Proceedings of the Royal Society B.

“One of the key takeaways is that if you want to change what you breathe inside your house, you would either have to move very far away or change the people and the pets you live with,” lead author Albert Barbaran, a graduate researcher at the University of Colorado at Boulder’s department of ecology and evolutionary biology, said in the news release.

The study findings may prove useful in allergy research and forensic investigations, according to the researchers.

The U.S. National Library of Medicine explains the link between house dust, allergies and asthma.