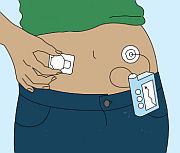 People with type 1 diabetes who use insulin pumps seem to have a much lower risk of dying from heart disease or stroke prematurely than those who rely on multiple daily injections of insulin, new research suggests.

Because this was only an observational study, the authors can’t say for sure that insulin pumps lowered death risk during the study, although they did find a significant association between these factors.

The findings were published recently in the BMJ. No funding for the study was provided by insulin pump manufacturers, Steineck added.

Type 1 diabetes is a disease that causes the body’s immune system to mistakenly attack the insulin-producing cells in the pancreas. Insulin is a hormone that helps the body convert sugar from foods into fuel. People with type 1 diabetes must replace that lost insulin to survive.

There are two basic ways to do this. One is multiple daily injections of insulin. The second option is an insulin pump. An insulin pump delivers insulin through a tiny tube that’s inserted under the skin. The person with diabetes programs the pump to tell it how much insulin to deliver and when. Insulin pumps are not fully automated; they still require a lot of input from the person using the pump, the study authors explained.

The study included more than 18,000 people with type 1 diabetes from the Swedish National Diabetes Register. Nearly 2,500 of them used an insulin pump to manage their diabetes, the study said.

Pump users’ average age was 38; for those taking injections, it was 41. During an average of almost seven years of follow-up, nearly 1,200 people died, the study found.

Steineck noted that insulin pumps and their supplies are fully covered by insurance in Sweden, although the choice of pumps is limited.

So how might insulin pumps reduce the risk of premature death? It’s possible they reduce the number of severe episodes of low blood sugar levels (hypoglycemia), the study authors suggested. Hypoglycemia has been linked to heart disease risk, they said.

One expert said the findings were interesting, but not conclusive.

“Continuous insulin infusion, otherwise known as pump therapy, is a more physiologic approach that has been shown in many analyses to be beneficial,” said Vincent Crabtree, director of research business development for JDRF (formerly the Juvenile Diabetes Research Association). “This paper is intriguing, but will need more research to draw definitive conclusions.”

Crabtree said that fewer than half of Americans with type 1 diabetes use an insulin pump.

Steineck hopes this new study will help boost those numbers. “Our study is one of many that gives evidence for a greater insurance coverage for insulin pumps,” she added.

Learn more about insulin pumps from the American Diabetes Association.