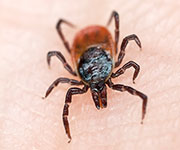 Ticks can travel from Central and South America to the United States by hitching rides on migratory birds, a new study reveals.

Some of these ticks may be carrying infectious diseases with them, the researchers said. However, there is no evidence that any ticks from these regions have established permanent populations in the United States, according to the study published in the Oct. 2 issue of Applied and Environmental Microbiology.

Researchers examined thousands of migratory birds immediately after they arrived in the United States from Central or South America. The investigators found that 3 percent of the birds carried so-called neotropical ticks.

But the ticks have little to no chance of surviving once they reach the United States, the authors suggested.

The United States doesn’t offer the exotic ticks the features they need “to survive, reproduce and spread,” study co-author Sarah Hamer said in a journal news release. Hamer is an assistant professor in the department of veterinary integrative biosciences at the College of Veterinary Medicine and Biomedical Sciences at Texas A&M University in College Station, Texas.

In their natural habitat, young neotropical ticks typically get their first and second blood meals from birds. But as adults they switch to large mammals such as sloths or anteaters, which aren’t found in the United States.

“Nonetheless, an adult of one of the neotropical tick species we found on [migrating birds] was recently found crawling outside of a home in Oklahoma, in the fall, which could represent a bird-imported nymph that arrived in the spring and successfully molted,” study co-author Emily Cohen explained in the news release. Cohen is a postdoctoral fellow from the Migratory Bird Center at the Smithsonian Conservation Biology Institute in Washington D.C.

Climate change could make it possible for these neotropical ticks to become established in the United States, Cohen warned.

The U.S. Food and Drug Administration explains how to protect yourself from tick-borne disease.