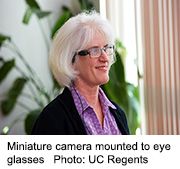 A device mounted onto eyeglasses enables people considered legally blind to “read” and perform other day-to-day activities, according to researchers.

The device, called OrCam, features a miniature camera with optical character-recognition technology. The camera deciphers text and then “reads” it to the user through an earpiece. The device can even be programmed to recognize specific faces and commercial products, according to the report.

“It is easily used and could potentially bring greater independence, particularly for older patients who are struggling with vision loss,” said study co-author Dr. Mark Mannis, chair of ophthalmology at the University of California, Davis.

His team’s pilot study included 12 people, average age 62, with severe vision loss caused by a variety of disorders. All were legally blind. The participants were first trained how to use the device, which operates either by tapping it, pressing a trigger button, or pointing it at an item.

After one week using OrCam, all participants could perform nine of 10 tasks, including: reading a message on an electronic device such as a smartphone or tablet, a newspaper article, menu, letter or page from a book; recognizing paper money denominations; locating a room in a hallway using wall-mounted signs; and recognizing products and distinguishing between similarly shaped and sized cereal boxes.

Only one person had technical difficulties with the device. Overall, the participants said the device was simple and easy to use and they would consider using it in their daily lives.

“Age-related macular degeneration is one of the most common causes of blindness in the elderly and it has no cure in its advanced stages,” he noted in a university news release.

According to the U.S. Centers for Disease Control and Prevention, about 1.8 million Americans aged 50 and older have age-related macular degeneration, and that number is estimated to reach about 3 million by 2020.

“This device offers hope to patients who are beyond medical or surgical therapy for the condition,” Mannis said.

While “more research is warranted . . . advancement in this technology could eventually make visually impaired individuals more independent,” said Dr. Nazanin Barzideh. She is chief of vitreoretinal surgery at Winthrop-University in Mineola, N.Y.

Dr. Mark Fromer is an ophthalmologist at Lenox Hill Hospital in New York City. He noted that most instruments that currently help people with low vision are simply “magnifying” devices.

The OrCam works in a different way. “This small pilot study demonstrates that portable artificial vision devices may be an effective aid to the visually impaired,” Fromer said.

He believes the technology “deserves further exploration, to aid the millions of individuals severely limited by their visual status.”

The U.S. National Eye Institute has more about low vision.