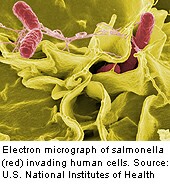 A salmonella outbreak that has been linked to contaminated cucumbers imported from Mexico has now caused 732 illnesses in 35 states, U.S. health officials said Tuesday.

Four deaths have been reported in the outbreak: one in Arizona, one in California, one in Oklahoma, and one in Texas.

So far, 150 people have been hospitalized, CDC officials said Tuesday.

Fifty percent of the illnesses reported have been in children under the age of 18, agency officials added.

On Sept. 4, the company considered the likely source of the tainted cucumbers, Andrew & Williamson Fresh Produce of San Diego, recalled its “Limited Edition” brand cucumbers because of their connection to the outbreak, the CDC reported.

On Sept. 11, Custom Produce Sales voluntarily recalled all cucumbers sold under the Fat Boy label starting Aug. 1, the CDC said Tuesday. Unlabeled cucumbers packed into a black reusable plastic container, and sold in Nevada since Aug. 1, are also covered by this recall. These cucumbers were sent to Custom Produce Sales from Andrew & Williamson, the agency said.