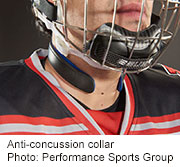 A new type a lightweight and pressurized neck collar may help prevent mild concussions during sports, according to the developers of the device.

The collar, which weighs four to five ounces — is designed to exert a minimal amount of continual pressure on the large neck veins that carry blood from the heart to the head, and back again.

That slight pressure, which is similar to the pressure of a tie knot, triggers a slight drop in the amount of blood that flows out of the head. That leaves a little extra fluid in the brain, which helps cushion it in case of impact, the researchers said.

The end result, said Cincinnati Children’s Hospital’s Gregory Myer, is the production of “a natural bubble-wrap for our brain.”

Speaking at a news briefing on the new technology this week in New York City, Myer said, “It’s the same principle behind seatbelts and airbags,” both of which serve to significantly lower the g-force associated with sudden impacts.

“This is technology that can keep us safe before injuries happen,” he said, stating that from an athlete’s perspective, “it makes complete sense.”

Traditionally, helmets have been the head protection of choice for both professional and amateur athletes, but they’re not foolproof when it comes to concussions.

“With helmets, we’ve effectively reduced skull fractures and lacerations. That’s what helmets are designed to do,” said Myer, director of research at Cincinnati Children’s Hospital’s division of sports medicine.

But, “they can’t prevent all forms of concussions. That’s not what they’re designed to do,” he added.

“Regardless of how big or how robust the helmet is, there’s still room for a brain in collision to move inside [the skull], and a helmet can’t mitigate that,” explained Dr. Julian Bailes, chairman of NorthShore University HealthSystem’s department of neurosurgery, and co-director of its Neurological Institute in Glenview, Ill.

It’s called “brain slosh,” Bailes said. It happens when a traumatic blow to the head causes the brain to hit the inner skull.

But, some animals have developed ways of coping with blunt head collisions — such as fighting rams, woodpeckers, and diving birds. Initial animal research found that backing up a small amount of blood into an animal’s head resulted in a dramatic drop in concussion risk, the researchers explained.

Researchers have also found that when high school athletes and National Football League players competed in high-altitude environments, without the collar, the greater blood flow to the brain that naturally occurs in such environments appears to reduce concussion risk by 30 percent.

In one study of Cincinnati-area high school athletes, those wearing the collar were largely protected against the kind of brain injury that can translate into devastating and long-lasting health complications, the researchers said. Those complications include: unrelenting headaches; impaired sleep; loss of appetite and energy; depressed moods; and incapacitating difficulties with thinking and memory.

One sports-medicine doctor not involved with the device called the collar “promising,” but said more research is needed.

“It’s important to understand that concussions are complex in nature, and there may not be a magic bullet to reduce or prevent them,” said Dr. Robert Glatter, former sideline physician for the New York Jets, and director of sports medicine and traumatic brain injury at Lenox Hill Hospital in New York City.

“The answer may instead lie at the biochemical or molecular level,” Glatter said.

For his part, Myer compared the new device to wearing a “seatbelt,” something that “can be worn comfortably for extended periods of time,” with or without a helmet.

“It is safe,” said Myer, who added that in terms of blood flow change, the collar is simply “facilitating a natural mechanism in the body when we lie down.”

Kevin Davis, chief executive officer of Performance Sports Group, the company developing the collar, said the collar could be available “in the next year or two.” But, both Myer and Bailes stressed that the device is not yet approved by the U.S. Food and Drug Administration. And it’s still considered experimental while testing continues.

Learn more about concussion from the U.S. Centers for Disease Control and Prevention.