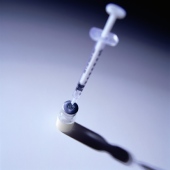 THURSDAY, Aug. 13, 2015 (HealthDay News) — Mononucleosis: It’s a fatiguing disease that lays low thousands of Americans — usually young people — each year. But new, early research offers hope for a vaccine against the virus that’s thought to trigger most cases of the illness.

The Epstein-Barr virus is also believed to help drive a number of types of cancer.

In mice and monkeys, the nanoparticle-based vaccine triggered the animals’ immune system to release powerful antibodies against Epstein-Barr, according to a study published Aug. 13 in the journal Cell.

Nanoparticles are microscopic particles being investigated as potential delivery vehicles for vaccines. The new findings suggest that this could be a promising approach for developing an Epstein-Barr virus vaccine for people, according to researchers led by virologist Dr. Jeffrey Cohen at the U.S. National Institute of Allergy and Infectious Diseases (NIAID).

While the work is promising, “there is still a long way to go before a vaccine that shows promise in mice and non-human primates will be ready for safe and effective protection of people,” said infectious disease expert Dr. Paul Lee, who was not involved in the new research.

According to NIAID, the Epstein-Barr virus was first identified in 1964 and is one of the most common human viruses, infecting 90 percent of people worldwide at some point in their lives. It is most commonly spread through saliva.

Most people infected with the virus do not get ill or have only mild symptoms, and Epstein-Barr is a major cause of infectious mononucleosis. It’s also linked with nearly 200,000 cases of cancer worldwide each year, including stomach and nasopharyngeal cancers, Burkitt and Hodgkin lymphoma, and non-Hodgkin lymphoma, the agency said.

Currently, there is no approved vaccine to protect people against Epstein-Barr virus.

Lee said while most cases of mononucleosis linked to Epstein-Barr are “mild,” about one in 10 cases are “very significant, and sometimes have prolonged symptoms.”

“Typically, this infection occurs in adolescents and young adults — usually the most healthy segment of the population,” said Lee, who works in the Infectious Diseases Program at Winthrop-University Hospital in Mineola, N.Y.

“There is also the fatigue which Epstein-Barr virus is notorious for — that can be severe and prolonged, and can take a month or more to resolve,” he said.

“In some studies, more than 10 percent of patients are still experiencing significant fatigue six months later,” Lee noted. “This can have a huge impact on adolescents and young adults who may be trying to graduate, apply to college or graduate school, or even work at a job, where poor performance can negatively affect their future lives, hopes and potential.”

According to the NIAID team, the nanoparticle vaccine design might also be used to create or redesign vaccines against other types of infections.

The U.S. Centers for Disease Control and Prevention has more about Epstein-Barr virus.