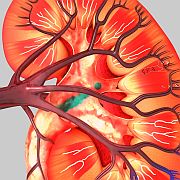 A new drug that harnesses the power of the immune system to fight tumors appears to help people battling advanced kidney cancer, a new study finds.

The study was funded by Bristol-Myers Squibb, which makes Opdivo. It was to be presented Friday at the European Cancer Congress in Vienna, and is being published simultaneously in the New England Journal of Medicine.

Sharma, a professor in the departments of genitourinary medical oncology and immunology, believes that the study results may “change the treatment of patients with advanced kidney cancer, whose disease has progressed on prior treatment.”

In the new trial, Sharma’s team compared Opdivo against Afinitor in more than 800 people with advanced kidney cancer. All of the patients had seen their tumor progress despite initial standard treatments.

Opdivo did seem to improve outcomes for patients, with median survival rising from 19.6 months for those taking Afinitor to 25 months among patients taking Opdivo, the researchers reported.

The data also showed that a greater proportion of patients had tumor shrinkage if they were taking Opdivo compared to people on Afinitor.

There were no drug-related deaths in the Opdivo group, but two occurred in the Afinitor group.

“Available drugs have limited activity or excess toxicity and new therapies are urgently needed,” he said.

Oh described Opdivo as a drug that “‘takes the brakes off’ the immune system,” and has already proven effective against cancers such as melanoma and lung malignancies.

The new study finds that Opdivo may fight kidney tumors, too, and “this drug is better tolerated,” Oh said.

“Having Opdivo available for our patients will be an important step forward,” he believes.

And when will the drug become available? According to Sharma, “although we cannot speculate at this time on when nivolumab [Opdivo] might enter the clinic, we hope that this study will quickly lead to approval of nivolumab as a standard of care therapy for these patients.”

The U.S. National Cancer Institute has more about kidney cancer.