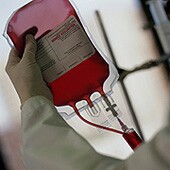 Obese and overweight people who have joint replacement surgeries are less likely to need blood transfusions and are no more likely to face complications than normal weight patients, a new analysis finds.

“But it could just be that larger patients have a larger total blood value,” he added. “And therefore lose a lower percentage of their blood than smaller patients during surgery. Essentially, it may be that they have a larger reserve in their tank, and can afford to lose a bit more blood without needing a transfusion. We don’t know. But at least conceptually that makes sense.”

Still, senior study author Dr. Craig Silverton, vice chairman of orthopaedics at Henry Ford, cautioned that more research will be needed to confirm the findings, given that they “contradict what we have always recognized as a significant risk factor for complications and transfusion.”

Silverton, Wessell and their colleagues presented the findings Thursday at a meeting of the International Society for Technology in Arthroplasty, in Vienna, Austria. Research presented at meetings should be considered preliminary until published in a peer-reviewed medical journal.

Concern about how excess weight may impact blood transfusion needs during hip and knee replacement surgery is centered on the fact that nearly 79 million Americans are now obese.

And as excess poundage increases the risk for joint problems, a large percentage of hip and knee surgery patients are overweight or obese, the researchers said.

During surgery, one overriding goal is to keep blood loss in check, to eliminate the need for a blood transfusion, they added.

Why? Transfusions have long been associated with a higher risk for infection, immune system problems, prolonged hospitalization and/or death. In fact, one-fifth of all blood transfusion patients (regardless of the surgery at hand) suffer some type of adverse reaction, the researchers said.

The good news: the majority of hip and knee surgery patients will never end up needing a transfusion. Silverton pointed out that “transfusions are much less common today than they were 20 years back. And ideally, eventually, no one would ever get a blood transfusion. That’s where we think we’re heading.”

But for the time being, Wessell said that he and his colleagues “initially thought that overweight and obese patients would need more operative time and larger surgical exposure, both of which would lead to a greater need for blood transfusions.”

To explore that theory, the team analyzed data concerning nearly 900 hip surgery patients and more than 1,500 knee surgery patients who had joint replacement operations at Henry Ford Hospital between 2011 and 2013.

First, body mass index (BMI) readings were used to classify patients as either normal weight (BMI under 25), overweight (BMI between 25 and 30) or obese (BMI 30 or above).

Blood transfusions during surgery were then stacked up against the weights of the patients.

Wessell said that his team also found no evidence that excess weight prolonged time spent under the knife.

Nevertheless, “we did see a trend towards an increased risk for infection among overweight and obese patients,” he said.

“I agree that the results are counterintuitive,” Miric said. But he also agreed that conclusions “would need to be replicated with more surgeons and a larger and more current patient population before such a finding would gain traction in the orthopaedic community.”