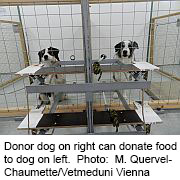 The tough, “dog eat dog” view of the canine world may be misguided: A new study finds that dogs can freely give food to other pooches, with no expectation of a reward for themselves.

But there’s a catch: Dogs studied in these experiments typically shared food only with dogs they knew, not with unfamiliar dogs.

“Dogs truly behave prosocially toward other dogs. That had never been experimentally demonstrated before,” study lead author Friederike Range of the University of Veterinary Medicine Vienna, Austria, said in a university news release.

According to her team, “prosocial” behavior — animals cooperating with each other when there’s no direct personal benefit — is known to occur in certain species beyond humans, such as other primates.

Dogs are highly social animals, but could they exhibit such behaviors as well? To find out, Range and her colleagues watched the behaviors of 16 dogs. The dogs were placed in an enclosure where they could use their mouths to pull a string, which would then bring a tray toward another dog in an adjoining enclosure.

The donor dogs — who did not receive any treat themselves as a reward for their actions — selected the tray with the treat on it more often for familiar dogs than for ones they did not know, the researchers reported Dec. 16 in Nature’s Scientific Reports.

“The degree of familiarity among the dogs further influenced this behavior,” Range noted. Dogs were more “reserved” in pulling a treats tray for an unfamiliar dog. In fact, donor dogs typically gave the cold shoulder to stranger dogs, “only rarely” interacting with them during the experiments, Range said.

Not surprisingly, when a dog was offered the chance to move a treat tray toward itself, it readily did so, the researchers said.

But it’s the prosocial, generous interaction between dog “friends” that was most striking, Range said.

“Dogs and their nearest relatives, the wolves, exhibit social and cooperative behavior, so there are grounds to assume that these animals also behave prosocially toward [familiar individuals],” she said. “Additionally, over thousands of years of domestication, dogs were selected for special social skills.”

The Humane Society has more about dogs and their behavior.