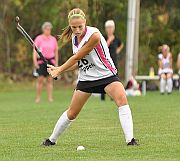 But the mandate doesn’t cover all players. And, the study found that the odds of sustaining an eye injury were more than three times as high in areas where the mandate was not implemented compared with areas where it was implemented.

Almost 70,000 student-athletes participate in high school field hockey in the United States, the study said. And participation rates among girls have increased by 28 percent from 1990 to 2014, according to the report published online Aug. 17 in Pediatrics.

The researchers analyzed national and regional injuries for four seasons of girls’ high school field hockey. These included the two seasons before the mandate for protective eyewear was implemented (2009-2010 and 2010-2011) and the two seasons after (2011-2012 and 2012-2013).

In states with the eyewear requirement, approximately 2.5 injuries occurred per 100,000 games and practices after the mandate was passed, the investigators found.

Protective eyewear is required for U.S. high school-sanctioned field hockey competitions. But eye protection is only voluntary in practices and in competitions, tournaments and other play that is not officially sanctioned by the National Federation of State High School Associations, Kriz said.

“Developmental, college and national-level field hockey coaches and programs have voiced concern that mandating protective eyewear use will jeopardize international recruitment efforts — as no other country mandates eyewear protection — and [hamper] the ability of the U.S. national teams to remain competitive internationally,” Kriz said.

One eye doctor said more needs to be done to protect players’ sight.

“As an eye surgeon working with the NHL [National Hockey League], who has been intimately involved with players suffering severe eye injuries, I find it astounding that a reasonable person could argue against protecting our children from a severe injury for the sake of recruitment of international players,” said Dr. Mark Fromer. He is director of eye surgery for the New York Rangers and an ophthalmologist at Lenox Hill Hospital in New York City.

“Ask any professional athlete who has lost an eye if they wish they had the opportunity to return to the game where they lost their sight, and revisit the notion of wearing protective eyewear,” he said.

The study’s implications may not be limited to field hockey either, suggested Dr. Daniel Karr, a professor of ophthalmology and pediatrics at Oregon Health and Science University and director of Elks Children’s Eye Clinic.

“The majority of childhood ocular injuries could be prevented by appropriate adult supervision and routine use of protective eyewear during athletic activities,” Karr said. “The results from this high school field hockey study strongly suggest that protective eyewear would correspondingly reduce injury in other high-velocity small ‘ball’ sports, such as tennis, ice hockey, baseball and others.”

The study also looked for any changes in rates of concussion before and after the change in policy. Some people were concerned that the protective eyewear might obscure vision and lead to more collisions, and possibly, concussions, according to the study.

However, the researchers found no difference in concussion rates before or after the eyewear requirement policy was put in place.

For more on preventing sports injuries, visit the U.S. Centers for Disease Control and Prevention.