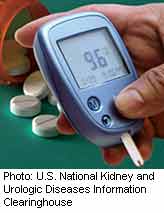 Running out the door without eating breakfast isn’t a good idea for anyone, but new research suggests that for people with type 2 diabetes, skipping the morning meal may wreak havoc on blood sugar levels for the rest of the day.

“This is of high relevance since skipping breakfast has progressively increased over the past decades in Western society,” said the study’s lead author, Dr. Daniela Jakubowicz, a professor of medicine at Tel Aviv University in Israel.

What’s more, she said, high blood sugar levels after meals are strongly associated with a rapid decline in beta-cell function. Beta cells are the cells in the pancreas that produce insulin, a hormone that’s necessary for the body to use the carbohydrates in food as fuel.

Results of the study were published recently in Diabetes Care.

In the current study, the researchers recruited 22 people with type 2 diabetes. Their average age was 57 years old. Their body mass index (BMI) was just over 28. BMI is rough estimate of how much body fat a person has, and a BMI of 28 means a person is overweight, but not obese.

On the day they ate three meals, the average glucose peak after lunch was 192 milligrams per deciliter (mg/dL). After dinner, it was 215 mg/dL, the study revealed. But on the day of no breakfast, the average glucose peak climbed to 268 mg/dL after lunch and to 298 mg/dL after dinner, the researchers said. (A normal blood sugar level is below 126 mg/dL.)

Jakubowicz said it seems that beta cells “lose their memory” due to the prolonged fast. “Therefore, it takes additional time after lunch for the beta cells to recover, causing small and delayed insulin responses, and resulting in exaggerate elevation of blood glucose levels throughout the day on the no-breakfast day,” she said.

Maudene Nelson, a certified diabetes educator and nutritionist at Columbia University in New York City, also noted that skipping breakfast led to higher levels of glucagon secretion, which raises blood sugar levels. “Once blood sugar levels are high, it’s harder to clean up ‘the mess’ as the day goes on,” explained Nelson, who wasn’t involved with the study.

“In the past, I’ve been somewhat laid back when people tell me they skip breakfast or only have coffee, because we all have our habits,” Nelson said, adding that the findings inspire her to tell patients skipping breakfast is not OK.

Jakubowicz said protein is an important component of any breakfast. She said it aids in “intellectual concentration” and helps you feel full. Nelson said good sources of protein include eggs, yogurt, cottage cheese or beans. She said the tuna offered in the study was also a good source of protein, and she said lean ham, preferably low-sodium, could be an occasional option.

Nelson also recommended adding fruit or a whole grain to breakfast. But most cereals don’t have enough fiber to be a good choice for people with type 2 diabetes, she said.

To learn more about nutrition and type 2 diabetes, visit the American Diabetes Association.