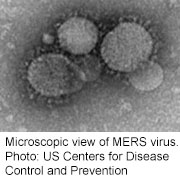 University of Pennsylvania researchers gave the synthetic DNA vaccine to rhesus macaques six weeks before exposing them to the MERS virus, and found that all of them were fully protected.

The vaccine also generated potentially protective antibodies in blood from camels, believed to be the source of MERS transmission in the Middle East.

The study was published Aug. 19 in the journal Science Translational Medicine.

Since it was identified in 2012, the coronavirus has caused more than 1,300 infections and nearly 400 deaths in the Middle East, Europe, South Korea and the United States, the researchers said.

“The significant recent increase in MERS cases, coupled with the lack of effective antiviral therapies or vaccines to treat or prevent this infection, have raised significant concern,” study author David Weiner, a professor of pathology and laboratory medicine at the university’s Perelman School of Medicine, said in a university news release.

“Accordingly, the development of a vaccine for MERS remains a high priority,” he added.

The experimental vaccine is non-live and poses no risk of unintended spread of the virus, study first author Karuppiah Muthumani said in the news release.

Muthumani, a research assistant professor of pathology and laboratory medicine at the Philadelphia-based university, said the vaccine could potentially overcome important production and delivery issues.

The U.S. Centers for Disease Control and Prevention has more about MERS.