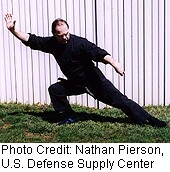 Specifically, those with breast cancer, heart failure, osteoarthritis or chronic obstructive pulmonary disease (COPD, which includes emphysema) saw improvements in strength, balance and posture without worsening pain or being out of breath, researchers said.

“If you’re older and have one of the conditions mentioned in the study, tai chi may be an alternative you can use to increase your fitness level,” said senior researcher Darlene Reid, professor and chair of the Department of Physical Therapy at the University of Toronto in Canada.

Tai chi is a series of gentle, flowing movements that aim to improve muscle power, balance, posture and flexibility, she said.

In addition, tai chi has a mental aspect, Reid said. “Many types of tai chi have a strong spiritual component,” she said. “So it may appeal to people in a different way than other types of exercise.”

Reid said other advantages of tai chi are that it can be done in a variety of environments, alone or in groups, and doesn’t require any equipment.

Moreover, as one ages, vigorous exercise may be less appealing, Reid said. “Tai chi is slow, rhythmical movements that have been developed over thousands of years and includes movements that require strength of different muscle groups,” she said.

The review was published Sept. 17 in the British Journal of Sports Medicine.

For the current review, researchers used data from 33 previously published studies. These studies included more than 1,500 people. The average age of people in the studies ranged from mid 50s to early 70s.

The average length of the tai chi training program was 12 weeks, and most sessions lasted an hour. Tai chi was usually done two to three times a week, the researchers said.

Tai chi resulted in improvement in a six-minute walking test; muscle strength (measured by bending and stretching the knees); the time it took to get up and move; and quality of life, the researchers said.

Tai chi was also associated with an improvement in pain and stiffness in osteoarthritis, in breathlessness in COPD, and improved sit-to-stand times among patients with osteoarthritis, the researchers said. They noted only an association and not a cause-and-effect link was seen between tai chi and physical improvements.

Samantha Heller is a senior clinical nutritionist and exercise physiologist at NYU Langone Medical Center in New York City. She reviewed the study and said, “The great thing about tai chi is that it is a gentle form of movement that is appropriate for many people suffering from medical conditions that preclude other, more rigorous forms of exercise.”

Tai chi is usually not expensive and many senior centers and other places offer free classes, she said.

“In addition there are videos and DVDs of tai chi so people can practice at home, though I would recommend initially working with a qualified instructor,” Heller said.

Dr. David Katz, director of the Yale University Prevention Research Center and president of the American College of Lifestyle Medicine, also reviewed the study. “Tai chi is accessible even to those who might think exercise out of reach due to their pain or functional limitations,” he said.

Other forms of exercise could likely offer the same benefit, he said.

“For now, though, we have evidence that tai chi confers the benefits of exercise on groups for whom physical activity is a challenge. That is reason enough to include it more routinely among doctor recommendations,” Katz said.

To learn more about tai chi, visit the U.S. National Center for Complementary and Integrative Health.