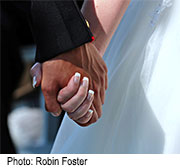 Toasting the bride and groom may bode well for healthful drinking later: A new study finds that marriage appears to lower drinking rates among young adults.

Researchers looked at long-term data from an ongoing study of familial alcoholism to learn how people’s drinking habits changed between ages 18 and 40. They also looked at how drinking habits were affected by marriage.

About 50 percent of the study participants were children of alcoholics, researchers said.

“Confirming our prediction, we found that marriage not only led to reductions in heavy drinking in general, this effect was much stronger for those who were severe problem drinkers before getting married,” Matthew Lee, a postdoctoral fellow in the department of psychological sciences at the University of Missouri, said in a university news release.

Although this study found a link between marriage and reduced drinking, it wasn’t designed to prove a cause-and-effect relationship between them.

But, Lee said one way marriage may change drinking behavior is by conflicting with the demands of a person’s expected role in marriage. “Thus, more severe problem drinkers are likely required to more substantially alter their drinking habits to adapt to the marital role,” he explained.

The study was published recently in the journal Alcoholism: Clinical and Experimental Research.

Further research is needed to learn more about how marriage reduces people’s drinking. Such insight could help lead to new ways to treat alcohol use disorders.

The U.S. National Institute on Alcohol Abuse and Alcoholism has more about alcohol use disorders.