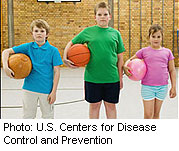 Trying to “guilt” kids into exercise may not work, a new study suggests.

Researchers from the University of Georgia found that middle school students were less likely to be physically active if they didn’t feel in control of their exercise choices or if they felt pressured by adults to get more exercise.

Kids who felt they could make their own decisions about physical activity were more likely to regard themselves as someone who exercises, which made them more likely to do so, the researchers said.

That raises the question, “Can we put these children in situations where they come to value and enjoy the act of being physically active?” lead author Rod Dishman, a professor of kinesiology, said in a university news release.

Children’s activity levels typically fall 50 percent between fifth and sixth grades, the authors noted in the September issue of the journal Medicine & Science in Sports & Exercise.

Dishman and his colleagues said they are looking for ways to help more children identify themselves as someone who exercises.

Above all, parents and teachers shouldn’t make children feel guilty for not being physically active, he said.

“The best thing is to do it because it’s fun. It’s the kids who say they are intrinsically motivated who are more active than the kids who aren’t,” Dishman concluded.

The U.S. Centers for Disease Control and Prevention has more about keeping children active.