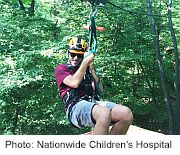 Zip lining has become a popular way to experience a little adventure, but serious injuries can be an unintended consequence of that momentary thrill, researchers report.

“Though the rate of injuries while zip lining is relatively low, when injuries do occur they can be quite serious,” said study co-author Tracy Mehan, manager of translational research for the Center for Injury Research and Policy at the Research Institute at Nationwide Children’s Hospital in Columbus, Ohio.

“The high rate of hospitalization is consistent with what we see for adventure sports, and reflects the severity of the injuries associated with this activity,” Mehan said in a hospital news release.

An estimated 16,850 nonfatal zip line injuries were treated in U.S. emergency departments between 1997 and 2012, and nearly 70 percent of those injuries occurred during the last four years of that span.

In 2012 alone, more than 3,600 zip line-related injuries were treated in ERs, which is nearly 10 per day. More than 90 percent of injuries occurred from April through October, with the peak in July, the researchers found.

The leading causes of injuries were falls (77 percent) and collisions (13 percent), including those with trees and other structures used to anchor zip lines.

The most common types of injuries were broken bones (46 percent), bruises (15 percent), strains/sprains (15 percent) and concussions/closed head injuries (7 percent). Eleven percent of patients with zip line injuries were admitted to the hospital, according to the study published Oct. 5 in the American Journal of Emergency Medicine.

A zip line is a pulley attached to a cable that’s usually made of stainless steel. The cable is suspended above an incline that allows the user to use gravity to slide from the top of the cable to the bottom.

The number of commercial zip lines in the United States grew from 10 in 2001 to more than 200 in 2012, and there are more than 13,000 amateur zip lines in outdoor education programs, camps and backyards, according to the study.

The U.S. National Library of Medicine has more about sports injuries.