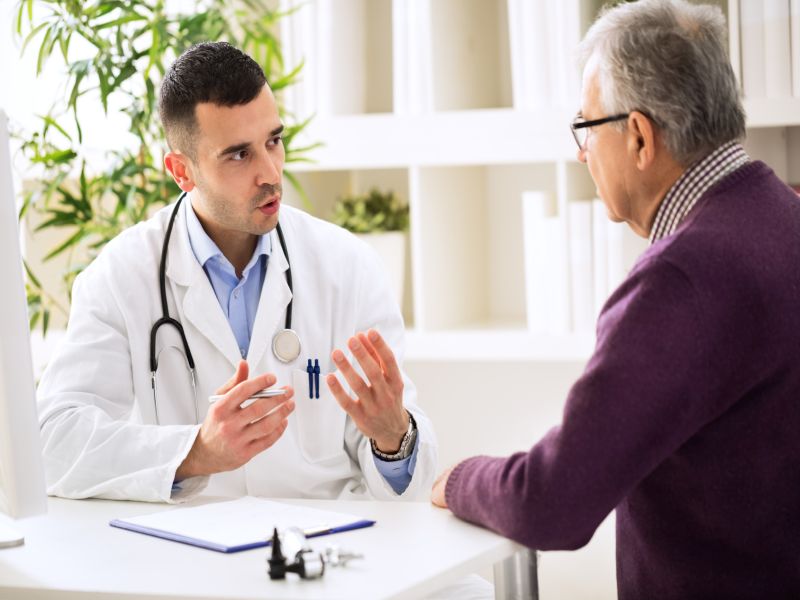 When men have both advanced prostate cancer and heart disease, treatment may pose a dilemma: Newer hormonal therapies that can slow the cancer down might also be risky for their hearts, a new study finds.

Once prostate cancer spreads beyond the gland, one of the mainstays of treatment is hormone therapy. The aim is to prevent androgens (“male” hormones such as testosterone) from feeding the cancer’s growth.

Doctors have known that hormone therapy may increase a man’s risk of developing heart disease. Its potential side effects include spikes in blood sugar, blood cholesterol and body fat — all of which contribute to heart problems.

But newer types of hormone therapy have become available in the past seven to eight years. And much less is known about their heart-related risks, said lead researcher Grace Lu-Yao, professor of medical oncology at Thomas Jefferson University in Philadelphia.

Overall, the study found, men with cardiovascular disease were at somewhat higher risk of dying within six months of starting treatment, versus other patients.

The risk was most clear among men with three or more cardiovascular conditions: They were roughly 50% more likely to die, versus men with healthy hearts.

The reasons for the findings are not completely clear, according to Lu-Yao.

But the drugs can raise blood pressure, contribute to fluid buildup, and affect blood levels of sodium or potassium.

Those effects might help explain the higher death risk, Lu-Yao said. Another possibility, she added, is that the drugs might interact with certain heart medications.

The findings do not mean that men with heart conditions should refuse hormonal therapies, according to Lu-Yao.

But, she said, they should discuss the benefits and risks with their doctor before making a treatment decision.

“And once they start treatment, they would need close monitoring,” Lu-Yao said.

The study was partly funded by the U.S. National Institutes of Health. It was published Aug. 13 in the journal European Urology.

The initial trials that won approval for abiraterone and enzalutamide excluded patients with “significant” cardiovascular conditions.

In the real world, though, many men with prostate cancer have heart disease — and they receive the hormonal therapies, said Dr. Salim Hayek, a cardiologist who focuses on the heart health of cancer patients.

Hayek, who was not involved in the study, is a member of the American College of Cardiology’s cardio-oncology section leadership council.

He stressed that this study should not scare patients away from hormone therapies. “There’s no data saying that the risks outweigh the benefits of these drugs,” Hayek said.

But he agreed that men with heart disease should be monitored while taking the medications — and they should keep seeing their cardiologist.

“After a cancer diagnosis, the cancer often becomes the focus,” Hayek said. “But cardiovascular health should not be neglected.”

The findings are based on nearly 3,900 elderly U.S. men treated for advanced prostate cancer with abiraterone or enzalutamide. Half were age 75 or older, and two-thirds had a preexisting cardiovascular condition.

In general, those men had a higher death rate within six months. For example, more than 2,200 men received abiraterone and no prior chemotherapy: The death rates among those with atrial fibrillation, heart failure or a past heart attack hovered between 23% and 25%, compared with 14% among men free of cardiovascular problems.

When the researchers weighed other factors — such as age and other health issues — men with one or two cardiovascular conditions were 16% more likely to die than men without those diseases. The risk among men with three or more conditions was 43% to 56% higher.

But could it be the heart issues, rather than the drugs? Lu-Yao doubted that, partly based on another finding: In the six months after starting abiraterone, hospitalizations rose among men with heart disease, versus the six months before. (The same was not seen with enzalutamide, however.)

More studies, Lu-Yao said, are needed to understand why — including whether the hormone therapy interacts with other medications and increases the risk of side effects from them.

The American Cancer Society has more on hormone therapy for prostate cancer.