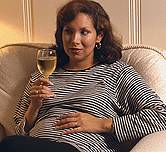 Although drinking alcohol during pregnancy poses a risk to the unborn child, one in 10 pregnant women in the United States still consumes alcohol, a new study finds.

What’s worse, slightly more than 3 percent of pregnant women admitted that they binge drink, consuming four or more alcoholic drinks at a time, according to the report from the U.S. Centers for Disease Control and Prevention.

“It’s very discouraging. It’s higher than I think any of us would have expected,” said Dr. Maura Quinlan, an assistant professor of obstetrics and gynecology the Northwestern University Feinberg School of Medicine in Chicago. Quinlan was not involved with the new study.

Alcohol consumption during pregnancy increases the risk of miscarriage, premature delivery and stillbirth, said the study’s lead author, Cheryl Tan, an epidemiologist in the CDC’s National Center on Birth Defects and Developmental Disabilities.

Babies also may be affected by a fetal alcohol spectrum disorder, which can cause developmental, behavioral and learning disabilities, Tan said.

“Women who are pregnant or might be pregnant should be aware that there is no known safe level of alcohol that can be consumed at any time during pregnancy,” Tan said. “All types of alcohol should be avoided, including red or white wine, beer and liquor.”

Data from the CDC’s ongoing Behavioral Risk Factor Surveillance System survey revealed that 10 percent of pregnant women in the United States, aged 18 to 44, had imbibed alcohol in the past 30 days.

The study also revealed that pregnant women engage in binge drinking more often than nonpregnant women — about 4.6 episodes during the previous 30 days, versus 3.1 episodes.

Binge drinking is a concern because it’s very likely that those women are exposing their children to alcohol on a regular basis, said Dr. Jennifer Wu, an obstetrician and gynecologist at Lenox Hill Hospital in New York City.

“Women who are binge drinking do tend to drink more frequently,” Wu said. “They are more likely to continue that throughout the pregnancy.”

Among pregnant women, alcohol use was highest among those aged 35 to 44 (19 percent), college graduates (13 percent) and unmarried women (13 percent), the investigators found.

There are mixed messages about drinking during pregnancy that may lead some women to think it’s OK to use alcohol, Tan said.

For example, some women are told that it’s OK to drink in the third trimester, or that drinking wine is healthy, or that small amounts are fine as long as you don’t overdo it, she said.

All of those are not true. “Again, there’s no safe amount and no safe type of alcohol to drink during pregnancy,” Tan said. “It’s just not worth it.”

Some expecting mothers also might be struggling with alcoholism, Quinlan added.

“Drinking is a part of our culture, and for many women it’s harder to stop, even when they’re pregnant,” she said. “The majority of them know this is dangerous for their pregnancy, but it’s an addiction like any other and can be difficult to switch off.”

“We need to ask every patient every time, every visit, and just keep bringing that message home that no alcohol use is acceptable,” Quinlan said.

The study also assessed drinking in women of childbearing years who aren’t pregnant, and found that about half (54 percent) had consumed alcohol in the past 30 days. About 18 percent of nonpregnant women report binge drinking.

The study results were published in the Sept. 25 issue of the CDC’s Morbidity and Mortality Weekly Report.