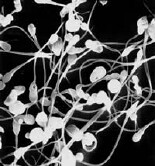 Attention, men: Your favorite meats might be helping or harming your fertility, a new study suggests.

While the research can’t prove cause and effect, it shows that men involved in fertility treatment who ate a lot of processed meats — bacon, sausage and the like — had poorer success, while those who ate more chicken or other poultry had better outcomes.

“Many studies have shown that diet can affect human fertility, but our diets are so complex that it is difficult to tease out how particular food types may affect reproductive outcomes,” Dr. Rebecca Sokol, president of the American Society for Reproductive Medicine, said in a society news release.

“This study suggests that the type of meat a man consumes may influence his sperm’s ability to fertilize an egg,” she said. “Eating a healthy diet is an easy change to make, and worth making for reproductive health as well as overall health.”

“Decreasing processed-meat consumption can now be added to the list of recommendations — such as to stop smoking, decrease alcohol consumption and lose weight — that we can offer to men prior to fertility treatments to optimize outcomes,” said Dr. Natan Bar-Chama, director of male reproductive medicine and surgery at the Mount Sinai Hospital in New York City.

A team led by Dr. Wei Xia, of the Harvard T.H. Chan School of Public Health in Boston, published their findings online Aug. 5 in Fertility & Sterility.

In their study, Xia’s team tracked outcomes for 141 men from couples undergoing in vitro fertilization (IVF) at Massachusetts General Hospital. The men provided information about their diet, including total meat intake and the types of meat they ate.

The researchers found no association between men’s total meat consumption and the rate of successful fertilization through IVF, either with or without the use of another technique called intracytoplasmic sperm injection (ICSI).

However, the fertilization rate for both types of IVF was 13 percent higher among men who ate the most poultry, compared with those men who ate the least amount of poultry (78 percent versus 65 percent), the study found.

And the fertilization rate for IVF without ICSI was 28 percent higher among men who ate the least amount of processed meat — such as sausage, bacon and canned meat products — than among those who ate the most processed meat (82 percent versus 54 percent).

Processed-meat consumption did not affect success rates in IVF with ICSI, and there was no association between men’s total meat intake and embryo implantation, pregnancy or live birth rates, according to the study.

So, should men hoping to help their partner conceive avoid bacon and other processed meats?

While it seems “sensible” to at least try the tactic, Dr. Elizabeth Kavaler, a urology specialist at Lenox Hill Hospital in New York City, said that the study can’t prove a direct link between certain meats and male fertility.

“One of the reasons the study may have found more successful outcomes in the men undergoing fertility treatments who ate chicken over bacon is that chicken-eaters may have an overall healthier diet and lifestyle than bacon-eaters,” she reasoned.

“Perhaps it is not the meat that is the problem, but the dietary choices that men who eat bacon make. Healthier dietary choices usually correlates with a healthier lifestyle, which may overall increase fertility outcomes,” Kavaler said.

For his part, Bar-Chama said that “red meat intake is [already] associated with increased cancer risk, and now with decreased fertility in men.”

He believes more research is now needed to focus on the “biological mechanisms” that might cause a high level of processed-meat intake to lower men’s fertility.

The American Academy of Family Physicians has more about male infertility.