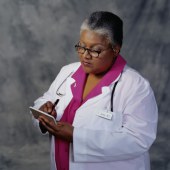 Antidepressants are the first treatment choice for a severe type of premenstrual syndrome associated with suicidal thoughts, according to a new research review.

Up to 8 percent of women with PMS have this condition, called premenstrual dysphoric disorder, or PMDD, according to researchers who evaluated 31 published studies on it.

Any woman with “depression, hopelessness, and self-deprecating thoughts that occur in the final week before the onset of menses” should see that as a warning sign to consult her physician, said study author Kenneth Trevino, a psychologist at University of Texas Southwestern Medical Center in Dallas.

Options for treating PMDD include birth control pills, psychiatric drugs like antidepressants, and supplements such as saffron, calcium and ginkgo biloba, the researchers say in background notes.

The researchers’ “reasonable and evidence-based” recommendations are important because “rather than just being a nuisance, PMDD interferes with a woman’s ability to ‘do life,'” said Dr. Christine Isaacs, a division head of the Virginia Commonwealth University’s department of obstetrics and gynecology, who wasn’t involved in the study.

Trevino and his co-author Shalini Maharaj, also at UT Southwestern, looked at the evidence supporting different therapies. They recommended that antidepressants called selective serotonin reuptake inhibitors, or SSRIs, should be the first choice for a woman with PMDD. This class of drugs includes Paxil, Zoloft and Prozac.

Serotonin is a nerve signaling chemical, or neurotransmitter, related to mood. SSRIs help keep this chemical available longer for brain cells to use, according to researchers.

Trevino and Maharaj analyzed studies looking at these antidepressants in almost 4,400 women with PMDD or premenstrual syndrome. Their recommendations were published in the September issue of the Journal of Psychiatric Practice.

Hormonal changes during the menstrual cycle can affect serotonin levels, which is one factor in PMDD, said the study authors. About 60 to 70 percent of women with PMDD will experience improvement with an SSRI, Trevino noted.

In general, PMDD differs from premenstrual syndrome by involving several symptoms just before a period starts, including mood-related problems such as anger, anxiety or depressed mood, and physical symptoms such as low energy or appetite, headaches or sleeplessness, Trevino said.

Isaacs also looks for repeated bouts of these issues in patients. “I would expect these symptoms to repeat and be cyclic in nature,” she said. “Often, I find women will come speak to me after the encouragement of a family member or loved one who is worried about them, having observed this pattern on multiple occasions.”

Trevino said the primary factor that should be considered is symptom severity, especially a woman’s current level of emotional distress. “The greater the symptom severity, the more important it is to start with the most effective or established treatment option, which would be an SSRI,” he said.

However, SSRIs are not for everyone. Just this week, a study published in the British Medical Journal concluded that Paxil (paroxetine) is not safe for teens with major depression, increasing their risk of suicidal behavior and self-harm.

Trevino said the 30 to 40 percent of women with PMDD who don’t benefit from antidepressants might try other treatment options, such as anti-anxiety medications or hormonal contraceptives. Indeed, contraceptives can be considered for a woman who wants to start birth control anyway, he said.

For other patients, “I may incorporate multiple modalities, such as SSRI and calcium, and recommend an exercise regimen,” said Isaacs. “It requires some trial and error at first and close follow-up with a trusted provider.”

The researchers found that calcium supplementation appears helpful for women with PMDD.

Options such as saffron and ginkgo biloba showed some promise in initial trials but need more research, said the authors. Behavioral therapies don’t seem to produce much improvement, they found.

Dietary factors like caffeine and “carbohydrate-rich” beverages seemed to have some benefit for mood in women with premenstrual syndrome, the authors wrote. Results with exercise are “encouraging” but also require more study, they said.

The last-ditch choice when other options don’t work is a drug that brings on “medical menopause,” but these medications are costly and can have unpleasant, menopause-like side effects, said the authors.

All of the possible therapies have their pros and cons, said Isaacs. “As a general philosophy, I try to incorporate the safest, least-invasive options first,” she said.

For more about PMS and PMDD, see Womenshealth.gov.