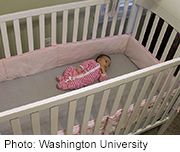 Infant deaths linked to crib bumpers have spiked in recent years in the United States, leading researchers to urge a ban on the padded bedding accessories.

Bumper-related crib deaths tripled from 2006 to 2012, compared with other seven-year stretches over the last quarter century, the study found.

“The risk for suffocation is real. The benefits are not,” said Dr. Bradley Thach, a professor emeritus of pediatrics with Washington University School of Medicine in St. Louis.

“It’s a problem that’s been a matter of discussion for some time now,” Thach said. “The difference now is that with these findings we are trying to get the U.S. Consumer Product Safety Commission (CPSC) to finally ban the use of bumpers altogether.”

The data shows they’re dangerous, Thach said. A baby’s face can get wedged against the bumper, or between the bumper and mattress, blocking the baby’s nose and mouth, he pointed out.

“The baby’s breathing can get completely blocked, or the baby ends up repeatedly breathing the same air in and out,” he said. “This continuous ‘re-breathing’ means that with every breath the air is increasingly depleted of oxygen, until eventually the baby suffocates.”

Some parents think the padding protects babies from bumping their heads against crib rails, “but we’ve found that if and when it happens, the result is only a minor bruise,” Thach said. “Padded bumpers are also designed to prevent things like limb entrapment [in crib slats], which can be done more safely with mesh bumpers.”

Thach and his colleagues published their findings in the Nov. 24 issue of The Journal of Pediatrics.

The U.S. National Institutes of Health and the American Academy of Pediatrics have also come out against the use of padded crib bumpers, according to background research with the study.

However, some experts believe that other crib objects — such as comforters, blankets, pillows and toys — pose a greater risk than bumpers for sudden infant death syndrome (SIDS).

Forty-eight infants died because of crib bumper suffocation, the study found, while 146 babies had injuries, such as near-choking, strangling or entrapment.

More than half the fatalities (32) were preventable in the absence of crib bumpers, the researchers said. In most cases, crib bumpers were pegged as the sole cause of death, despite the presence of other objects.

The study team also found that the 23 deaths reported by the commission between 2006 and 2012 represented a near-tripling of the average number (eight) reported in the three seven-year periods from 1985 to 2006.

An additional review of data collected between 2008 and 2011 by the National Center for the Review and Prevention of Child Deaths identified another 32 bumper-related deaths across 37 states, most of which had not been cited by the CPSC. That put the number of fatalities tied to crib bumpers at 77, and suggested that the actual number is much higher, the authors said.

Thach said the reason for the upward trend remains unclear, though increased reporting of cases may play a role.

“We think this conversation about bumpers, which has been going on for a very long time, needs to come to a conclusion,” he added. “And that conclusion should be the elimination of bumpers.”

Scott Wolfson, communications director of the Consumer Product Safety Commission, said that in 2013 it accepted a petition that would eventually establish federal standards for crib bumpers. But the exact nature of those standards is still under review.

In the meantime, Wolfson said that the agency stands behind its current sleep safety campaign, whose theme is “Bare is Best,” meaning babies are safest when their crib is clutter-free.