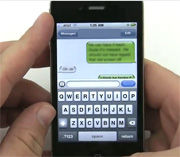 Researchers from New Jersey looked at nearly 3,200 middle and high school students in the state. They found that nearly 62 percent of the kids used their smartphones in some capacity after bedtime; nearly 57 percent texted, tweeted or messaged in bed; and nearly 21 percent awoke to texts.

“Our study confirms that many teenagers are texting late at night when they should be sleeping. This behavior is more common among older teenagers, especially those in high school, and among girls,” said study co-author Vincent DeBari. He is director of research at the Seton Hall University School of Health and Medical Sciences, in South Orange.

“One of the most worrisome aspects of our findings is that in addition to affecting the quality and amount of sleep teenagers are getting, bedtime smartphone use seems to be having a negative impact on their level of alertness during the day and on their grades in school,” DeBari said in a university news release.

His study co-author, Dr. Peter Polos, added that teens whose sleep is disrupted by incoming texts may feel compelled to respond to those texts immediately. These exchanges can go on for hours.

“This leads to excessive stimulation at night. Light from electronic devices can suppress the secretion of melatonin, a hormone that promotes sleep. All of these factors combine to make sleep difficult in the face of excessive smartphone use at night,” said Polos, a member of the sleep medicine division of the JFK Neuroscience Institute in Edison, N.J.

The researchers also found that smartphone use just before or after bedtime may worsen teens’ tendency to go to bed much later and sleep until late morning. This behavior has been linked with depression, anxiety and attention-deficit hyperactivity disorder, the study authors said.

“Repeatedly, studies have shown that today’s adolescent students are seriously sleep-deprived, and that it affects their health, their mood and their safety behind the wheel. Our study shows that the unrestricted use of smartphones at night may be a major contributing factor,” Dr. Sushanth Bhat, an assistant professor of neuroscience at Seton Hall, said in the news release.

“Since getting the proper amount of sleep is very important for brain development and learning in the teenage years, our study should prompt parents and guardians to consider placing reasonable limitations on adolescent smartphone usage at night,” Bhat concluded.

The study findings appear in the October issue of the Journal of Adolescence.

The National Sleep Foundation has more about teens and sleep.