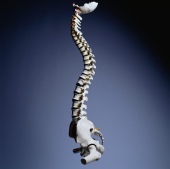 The spines of boys and girls aren’t the same size at birth, a new study shows.

Researchers suspect this difference is probably due to an evolutionary adaptation that allows females’ spines to cope with the added weight they carry during pregnancy.

The researchers used MRIs to measure the small bones that form the spine (vertebrae) in 70 healthy, full-term male and female newborns.

The diameter of cross sections of the vertebrae — a key factor in the strength of these bones — were an average of 11 percent smaller in girls than boys, the study revealed.

The study was published in the August issue of the Journal of Pediatrics.

“Human beings are the only mammals in which this difference is seen, and it is one of the few key physiological differences between the sexes,” study senior author Dr. Vicente Gilsanz, research imaging program director at Children’s Hospital, Los Angeles, said in a hospital news release.

“The reason could be that the spine has to move forward during pregnancy, so that the female can walk and maintain her center of gravity,” he explained.

But, what helps a woman carry a baby during pregnancy may make her susceptible to injury the rest of her life. Gilsanz said these changes increase stress on the back and up the odds of fractures later in life.

Women also have a higher risk of scoliosis (abnormal curvature of the spine) and osteoporosis than men, Gilsanz noted.

“Although we’ve known that girls had smaller vertebrae than boys, we did not know how early this difference first occurred,” Gilsanz said. “Our study indicates that the distinction between sexes is already present at birth, and provides new evidence that this difference begins during prenatal development of the axial skeleton.”

“This is an example of how traits that might predispose an individual to disease can be mitigated through personalized medicine and customized health care, beginning early in life,” he added.

The National Osteoporosis Foundation has more about osteoporosis and the spine.