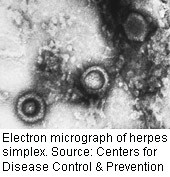 A drug applied as a vaginal gel may substantially cut women’s risk of contracting genital herpes, a common and incurable sexually transmitted infection.

That’s the conclusion of a study published in the Aug. 6 issue of the New England Journal of Medicine. Researchers found that the gel, applied vaginally before and after sex, halved women’s risk of infection with herpes simplex virus (HSV) type 2.

HSV-2 is the strain of the herpes simplex virus that causes most cases of genital herpes. It’s a common infection: In the United States, an estimated 16 percent of 14- to 49-year-olds have an HSV-2 infection, according to the U.S. Centers for Disease Control and Prevention.

The virus is even more common in some other parts of the world. In sub-Saharan Africa, up to 80 percent of sexually active women and half of sexually active men are infected. The new study took place in South Africa, one of those hardest-hit countries.

The gel, which contains a drug called tenofovir, is still experimental, stressed study leader Dr. Salim Abdool Karim, director of the Center for the AIDS Program of Research, in Durban, South Africa.

Further research will probably be necessary for drug regulators in various countries to consider approving the medication, Karim said.

The current trial was not primarily designed to test tenofovir gel against HSV-2; its main aim was to curb the risk of HIV transmission. The oral formulation of tenofovir, which is marketed as Viread, is already used to treat HIV, the virus that causes AIDS.

Earlier results from the trial had suggested the gel version can reduce women’s risk of contracting HIV. However, follow-up research yielded disappointing results — largely because many women were not able to use the gel consistently.

With any such preventive therapy, “how people use it is important,” said Dr. Connie Celum, a spokeswoman for Infectious Diseases Society of America and a professor at the University of Washington, in Seattle.

Still, she called the gel a “promising intervention that could reduce herpes acquisition.”

Celum, who was not involved in the research, has studied oral tenofovir as a way to prevent herpes simplex virus type 2 infection. In a trial reported last year, her team found that the medication had a modest benefit among the African adults they studied.

The gel formulation, Celum said, contains much higher concentrations of the drug than the tablet form.

HSV-2 infection itself is not usually dangerous. It sometimes causes painful sores around the genitals, rectum or mouth. More often, though, it causes no symptoms or only mild ones — which means most people with the infection are unaware of it.

However, in rare cases, the virus invades the brain and triggers potentially deadly inflammation. And if it’s passed from mother to newborn, HSV-2 can be fatal for the baby.

What’s more, Celum said, genital herpes can double the risk of becoming infected with HIV — which is especially troubling in areas of the world where both infections are prevalent.

Once a person is infected, the virus hides out in nerve cells and reactivates periodically, sometimes causing symptoms. In wealthier countries, there are a few medications that can treat symptoms and, if taken daily, help suppress new outbreaks. They include acyclovir (Zovirax), famciclovir (Famvir) and valacyclovir (Valtrex).

Daily treatment with those drugs can also reduce the chances of passing herpes simplex virus type 2 to a sexual partner, but it doesn’t eliminate the risk.

Both Celum and Karim said tenofovir gel could offer an additional weapon against HSV-2 not only in developing countries, but wealthier ones, too.

The current study looked at a subgroup of women who’d taken part in the larger trial testing tenofovir gel against HIV. The group included 422 who were free of HSV-2 when they were randomly assigned to use either the drug or an inactive placebo gel; they were told to apply it vaginally before and after having sex.

Over 18 months, women who used the drug-containing gel were 51 percent less likely to contract HSV-2, compared to the placebo group, the investigators found.

Condoms, when used consistently, can also lower HSV-2 risk. But worldwide, many women have a difficult time “negotiating” condom use with their partners, Karim pointed out.

The gel could give them an option they can better control, he said.

One looming question is what the cost would be.

Karim’s trial was funded by the U.S. and South African governments and CONRAD, a non-profit. Gilead Sciences, the U.S. maker of Viread, donated the drug’s active ingredient, and the gel-filled applicators were manufactured locally in South Africa.

The cost was about $2 per applicator, Karim said. “For the product to be viable,” he added, “it will have to cost only a few cents.”

More work will be needed to figure out how to bring costs down, Karim said.

The U.S. Centers for Disease Control and Prevention has more on genital herpes infection.