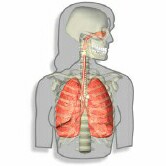 Chronic obstructive pulmonary disease (COPD) — a serious disease that impairs breathing — is the third leading cause of death in the United States. But an influential government panel says there’s as yet no evidence to support screening for COPD in adults with no symptoms.

In a draft recommendation released Monday, the U.S. Preventive Services Task Force said the panel had reviewed the latest evidence and saw no reason to change its earlier recommendation on COPD screening, issued in 2008.

“The task force found that there is no evidence that screening for COPD in adults without symptoms results in improved health outcomes,” member Dr. William Phillips said in a news release from the independent panel of experts.

COPD includes emphysema, chronic bronchitis or a combination of the two. Common symptoms include difficulty breathing, chronic cough, wheezing and phlegm production. Over time, the condition can prove fatal.

Smoking is the main cause of COPD, and more than 70 percent of people with the disease are current or former smokers, the task force noted.

“The most important step you can take to prevent COPD is to avoid smoking,” Phillips said. “People who smoke should talk with their doctors about ways to quit.”

“The risk of developing COPD in smokers could be greatly curtailed by helping them to quit smoking through behavioral modifications, practical counseling, medication, nicotine-replacement therapy, and access to community resources,” said Dr. Andrea Spatarella, of the Center for Tobacco Control at North Shore-LIJ Health System in Great Neck, N.Y.

But another expert in respiratory health said routine screening may be needed to spot more people with “hidden” COPD.

“I completely disagree with [the new recommendation],” said Dr. Len Horovitz, a pulmonary specialist at Lenox Hill Hospital in New York City. “I have many patients who deny shortness of breath upon exertion and yet have COPD, sometimes moderate. You don’t need to smoke to get COPD — plenty of symptomatic people have it, or mild asthma.”

His advice? “Screen for it,” Horovitz said.

The draft recommendation was posted on the task force’s website Aug. 17 and will remain open for public comment until Sept. 14, 2015.

The American College of Physicians, the National Institute for Health and Clinical Excellence and other organizations also recommend against COPD screening in adults with no symptoms.

The U.S. Centers for Disease Control and Prevention has more about COPD.