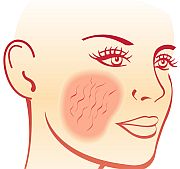 Millions of Americans may wonder what caused them to develop the chronic skin disease rosacea. New research suggests the reason is half environmental and half genetic.

On the environmental side, sun exposure is the key contributor. But obesity, alcohol and heart disease also appear to raise risk, the new study found.

“Fifty-fifty is not a complete surprise in retrospect,” said study lead author Dr. Daniel Popkin. “But we just didn’t know.

“We now have strong evidence for the first time that there is clearly a genetic contribution,” said Popkin, an assistant professor of dermatology at Case Western Reserve University in Cleveland.

If you have a strong family history of rosacea, “more attention should be paid to environmental factors, and seeking medical advice can help quite a bit,” he said.

“Lifestyle choices can definitely attenuate [reduce the severity of the] disease,” Popkin said, with use of sun protection his No. 1 recommendation.

The National Rosacea Society estimates that more than 16 million Americans suffer from the disease. Former President Bill Clinton is among them.

Uncontrolled, the disease can worsen and diminish someone’s quality of life. In surveys, more than nine in 10 patients have reported flagging self-confidence and self-esteem, the rosacea society says.

Efforts to nail down the cause of rosacea have proven elusive. To get a better sense of the contributions of nature versus lifestyle, Popkin and his colleagues focused on 275 pairs of twins.

Twins, the research team noted, are often the subject of genetic investigations, given the ability to compare identical pairs, who share 100 percent of their genetic makeup, with fraternal twins, who share half their makeup.

In this case, 233 identical twin pairs and 42 fraternal twin pairs were selected. All were between 18 and 80 years old, and most were from Ohio, Pennsylvania and the northeastern United States.

All participants completed lifestyle and medical history surveys, and underwent dermatological screening before receiving their rosacea “score,” which ranged from absent to severe.

The investigators concluded that genetics appeared to contribute to 46 percent of rosacea risk.

The links with obesity and heart disease were a surprise, the researchers said.

Popkin said his team plans to continue with their work. In the meantime, he stressed, “all of these findings are associations and we cannot prove causality.”

Dr. Lawrence Eichenfield, chief of pediatric and adolescent dermatology at the University of California, San Diego, and Rady Children’s Hospital in San Diego, said you can reduce your risk of rosacea.

“You can’t change your genetics without changing who your parents were, but you can [avoid smoking] and not get too much sun,” he said.

“If you have signs of rosacea, or think you might, such as having a family history,” Eichenfield added, “get educated about it and consider moderating UV exposure, alcohol, and foods that might cause flushing.” For instance, doctors say eating spicy or sour foods can cause facial flushing and redness.

The study findings were published recently in the Journal of the American Medical Association.

There’s more on rosacea at the National Rosacea Society.