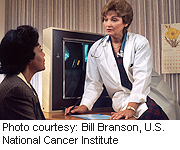 Only about one-third of women receive genetic counseling before they undergo testing to see if they have a gene mutation that increases their risk of breast or ovarian cancer, a new study reports.

Such counseling is important prior to undergoing genetic testing for mutations of BRCA, a gene strongly linked to the risk of both cancers, the study authors said. And actress Angelina Jolie’s revelations about discovering she had a BRCA mutation and deciding to have her breasts and ovaries removed has raised awareness about the importance of genetic tests and counseling.

In the study, patients who received genetic counseling beforehand displayed better knowledge of the process and possible results. And they reported more comfort heading into the test, according to the study results published online Oct. 1 in the journal JAMA Oncology.

“While there certainly are physicians who are capable of providing appropriate genetics counseling for their patients, there are many who are not, and many who admit they don’t feel comfortable trying to provide such counseling,” said senior study author Dr. Rebecca Sutphen. She is president and chief medical officer of InformedDNA, a national provider network of genetics specialists.

Not all experts agree with the importance of genetic counseling prior to testing, however.

An accompanying editorial in the journal questioned the value of pretest counseling, arguing that the emphasis should be placed on genetic counseling for women who have received a positive test for BRCA mutations, so they fully understand their medical options.

“I think it’s perfectly reasonable that the surgeon should order the test directly. I don’t see that, in 2015, genetic counselors add anything to the process,” said editorial author Dr. Steven Narod, director of the familial breast cancer research unit at the Women’s College Research Institute in Toronto. “If they have a mutation, they should see a genetic counselor. If they don’t, I think it just slows down the process.”

Narod also questioned the fact that the study was funded by the health insurer Aetna and conducted by researchers affiliated with InformedDNA.

“This is a paper driven by a for-profit company that sells genetic counseling services,” he said.

BRCA mutations have been so strongly established as a cancer risk factor that the U.S. Preventive Services Task Force has added BRCA risk assessment and genetic counseling to its list of recommended preventive procedures. That means insurers compliant with the Affordable Care Act must pay the full cost of providing such counseling and testing if a woman has a family history of breast or ovarian cancer.

Of those women, about 37 percent reported receiving genetics counseling from a genetics professional prior to testing, the study authors said. The most common reason reported by women for not receiving this service was the lack of a recommendation from their doctor.

The women who did receive genetic counseling by a trained genetics professional displayed greater knowledge of BRCA and expressed greater understanding and satisfaction, according to the results.

Such counseling is important to help a woman understand the implications of the test, especially since the falling cost of genetic testing means that doctors often order a test that covers dozens of genes.

“We’re no longer just doing a test for BRCA. We’re doing a panel of up to 25 different genes,” Daly said. “That makes the interpretation of the results that much more difficult.”

But only one out of every 20 women in this study came back positive for a BRCA mutation, which raises the question of whether the other 19 women received any benefit at all from the counseling they got beforehand, Narod said.

In the past, insurance companies required genetic counseling prior to testing as a cost-saving measure, to make sure that women without a family history of cancer were steered away from the then-expensive procedure, Narod said.

Women would be better served if the limited number of genetics counselors in the United States focused on helping them interpret the results of a positive test, rather than preparing them prior to the test, he said.

Women with a positive test might need to have their breasts or ovaries removed as a cancer prevention measure, or might have to undergo regular MRI screenings for cancer, Narod said. They also face passing along this knowledge of hereditary cancer risk to other female family members. By comparison, there’s no real genetic counseling required if the test comes back negative.

“The doctors are perfectly capable of ordering the test, providing the preliminary information the patient needs in order to decide whether to have the test, and interpreting a negative test,” Narod said. “The genetic counselor should focus on interpreting a positive test.”