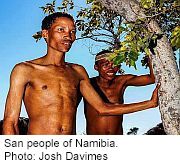 Fast-paced urban lifestyles may not be to blame for the lack of sleep that plagues many people today, a new study shows.

Researchers tracked the sleep habits of three traditional hunter-gatherer groups in Bolivia, Namibia and Tanzania, and found their sleep timing and duration to be similar to those of more “modern” people.

The finding “has important implications for the idea that we need to take sleeping pills because sleep has been reduced from its ‘natural level’ by the widespread use of electricity, TV, the Internet and so on,” researcher Jerome Siegel of the University of California, Los Angeles, said in a news release from the journal Current Biology.

His team published its findings in the Oct. 15 issue of the journal.

In the study, Siegel’s team followed the sleep habits of 94 people from three hunter-gatherer tribes across different parts of the world: the Hadza people of Tanzania, the San of Namibia, and the Tsimane of Bolivia.

People in all three groups slept an average of just under 6.5 hours a night, the researchers noted. They typically go to sleep about three hours after the sun goes down (even though they don’t have electric lights), wake up before sunrise, and don’t take regular naps, the study found.

All of that is similar to the sleep habits of people in modern societies, the researchers added.

“The short sleep in these populations challenges the belief that sleep has been greatly reduced in the ‘modern world,’ ” Siegel said.

His team members also believe that the hunter-gatherers’ sleep habits may have more to do with temperature than light: People tended to go to sleep as the temperature fell and they slept through the coldest part of the night.

However, the researchers also discovered that very few hunter-gatherers have chronic insomnia, a common problem in the United States. That finding could prove important.

“Mimicking aspects of the natural environment experienced by these groups might be effective in treating certain modern sleep disorders, particularly insomnia, a disorder affecting more than 20 percent of the U.S. population,” Siegel said.