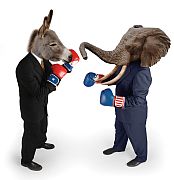 Voters seem to prefer political candidates with deep voices because they convey strength and competence, a new study finds.

This attraction to deep voices may be due to “caveman instincts,” researchers said. These instincts may lead people to associate leadership ability with physical power rather than experience and wisdom, researchers from the University of Miami and Duke University suggested.

“Modern-day political leadership is more about competing ideologies than brute force. But at some earlier time in human history it probably paid off to have a literally strong leader,” study co-author Casey Klofstad, an associate professor of political science at the University of Miami, said in a Duke University news release.

The study included 800 adults. They completed surveys based on hypothetical candidates, and listened to voice recordings of those candidates. The recordings were altered up or down in pitch using computer software. The study found that deeper-voiced candidates won 60 percent to 76 percent of the votes.

Findings were published online Aug. 7 in the journal PLOS ONE.

“We think of ourselves as rational beings, but our research shows that we also make thin impressionistic judgments based on very subtle signals that we may or may not be aware of,” Klofstad said.

He noted that there are times when it’s fine for people to follow their gut feelings, but “if it turns out that people with lower voices are actually poorer leaders, then it’s bad that voters are cueing into this signal if it’s not actually a reliable indicator of leadership ability.”

The researchers found that voters preferred deeper voices in female candidates, too.

“Becoming more aware of the biases influencing our behavior at the polls may help us control them or counteract them if they’re indeed leading us to make poor choices,” Klofstad said.

The American Academy of Otolaryngology–Head and Neck Surgery explains how the voice works.