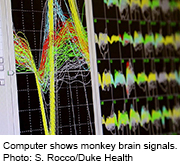 Researchers who made it possible for monkeys to operate a robotic wheelchair using only the monkey’s thoughts say the technology might eventually be used by severely disabled people.

The Duke University neuroscientists created a brain-machine interface that translates a monkey’s thoughts about movement into real-time operation of the wheelchair.

The report, published online March 3 in Scientific Reports, shows the potential such devices hold for people who have lost most of their muscle control and mobility due to disease or injury, said senior study author Dr. Miguel Nicolelis, co-director of Duke’s Center for Neuroengineering, in Durham, N.C.

“In some severely disabled people, even blinking is not possible. For them, using a wheelchair or device controlled by noninvasive measures like an EEG [a device that monitors brain waves through electrodes placed on the scalp] may not be sufficient,” Nicolelis said in a university news release.

“We show clearly that if you have intracranial implants, you get better control of a wheelchair than with noninvasive devices,” he added.

The researchers monitored the brain activity of two rhesus macaque monkeys as they were trained to move a wheelchair toward a bowl containing grapes. Using this data, the research team programmed a computer system to translate movement-related brain signals into digital commands that controlled the wheelchair.

“This was not a signal that was present in the beginning of the training, but something that emerged as an effect of the monkeys becoming proficient in this task,” Nicolelis noted. “This was a surprise. It demonstrates the brain’s enormous flexibility to assimilate a device, in this case a wheelchair, and that device’s spatial relationships to the surrounding world.”

While research with animals often fails to provide similar results with humans, the scientists said they will conduct more research with monkeys before considering tests of the technology in people.

The U.S. National Institute of Biomedical Imaging and Bioengineering has more on technology to assist disabled people.