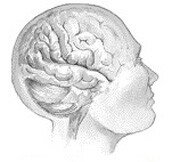 In this new study, the researchers found that these changes are already present before schizophrenia, a serious mental illness, is diagnosed. The findings offer a potential marker for the disease that affects 1 percent of people worldwide, the researchers said.

“Up until this study, we did not know whether this pattern was a result of the disease or a potential byproduct of medication or some other factor,” study lead author Alan Anticevic, assistant professor of psychiatry, said in a Yale news release.

“We show these same abnormalities already exist in people who are at higher risk for developing psychosis,” he explained.

The study was published online Aug. 12 in the journal JAMA Psychiatry.

Schizophrenia usually develops in the late teens or early adult years, but patients often experience early warning signs such as mild suspicion, or hearing a voice calling their name.

In this new study, the researchers analyzed the brains of 243 people with early warning signs of schizophrenia and 154 healthy people, and then followed both groups for two years.

Further research is needed to confirm if the brain changes identified in this study actually cause schizophrenia, the study authors said.

The U.S. National Institute of Mental Health has more about schizophrenia.