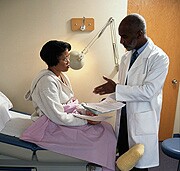 Too few members of minority groups are pursuing careers in U.S. medicine, resulting in a serious lack of diversity among general practitioners and specialty doctors, a new report finds.

Publicly reported data gathered by researchers showed that in 2012:

“My father graduated medical school in 1960, and at that time only 3 percent of doctors were black,” said Dr. Wayne Riley, president of the American College of Physicians (ACP) and a clinical professor of medicine at Vanderbilt University in Nashville.

“This study shows 3.8 percent of doctors are black. We’ve had barely perceptible progress. Over a 50-year period, we are still nowhere near African-American and Latino physicians representing their percentage of the population,” said Riley, who is black.

The study findings were published in the Aug. 24 edition of JAMA Internal Medicine.

Diversity is important for many reasons that relate directly to patient care, experts said.

For example, many minority doctors wind up going into primary care and returning to the communities they came from, helping to treat people who otherwise might not be able to find a physician, said Marc Nivet, chief diversity officer at the Association of American Medical Colleges.

Some studies have shown that patients can relate better to doctors who look like them, said Dr. Laura Riley, an obstetrician who is director of Labor and Delivery at Massachusetts General Hospital (MGH) in Boston. She also wrote an accompanying commentary to the study. She is not related to the ACP’s Riley.

“Sometimes there really is that connection that can make a difficult conversation or circumstance a little less difficult,” she said.

Other research has found that doctors from the same racial and ethnic group as a patient may be more sensitive to the issues that a patient faces, Nivet said.

For example, they can design medication schedules or treatment protocols that patients are more likely to stick with, because they’ve taken into account the background of the patient, he said.

Doctors from different racial and ethnic groups also increase the cultural competency of all the doctors around them, helping them better understand the different circumstances of patients, he added.

“It gives all physicians an opportunity to raise their level of cultural competence, because they have peers who are different,” Nivet said.

Women have successfully made inroads into medicine, the study showed. For example, women now represent 48 percent of medical school graduates and 46 percent of trainees in graduate medical education, the study found.

A number of roadblocks remain for minorities, starting with the primary education they receive.

“There’s uneven quality in K-through-12 education,” said the ACP’s Riley. “We have to improve public education, and make sure we expose young men and women to the notion that they too can become medical professionals and participate in a wonderful life serving others in a health care setting.”

Cost is another factor. “Medical school is ridiculously expensive,” MGH’s Riley said. “I think we need to be sure it isn’t something that takes people off the path.”

More scholarships and financial assistance would help, but Nivet added that students also can be encouraged by people who provide a broader perspective on that cost.

“For low-income students, the idea that you could have $200,000 in college debt causes some to weed themselves out of the process,” Nivet said. “The only way they’ll stay in is if they have good counselors or role models that tell them that it’s a solid investment in their future, and that the return on that investment will be extremely high.”

ACP’s Riley noted that he is only the third black president that the American College of Physicians has had in its 100-year history.

“I don’t want to be an aberration in the history of the American College of Physicians,” he said. “We need more physicians to follow in my footsteps. I worry it may be many, many years before someone like me rises to a leadership position.”

For more information on minorities in medicine, visit the Association of American Medical Colleges.