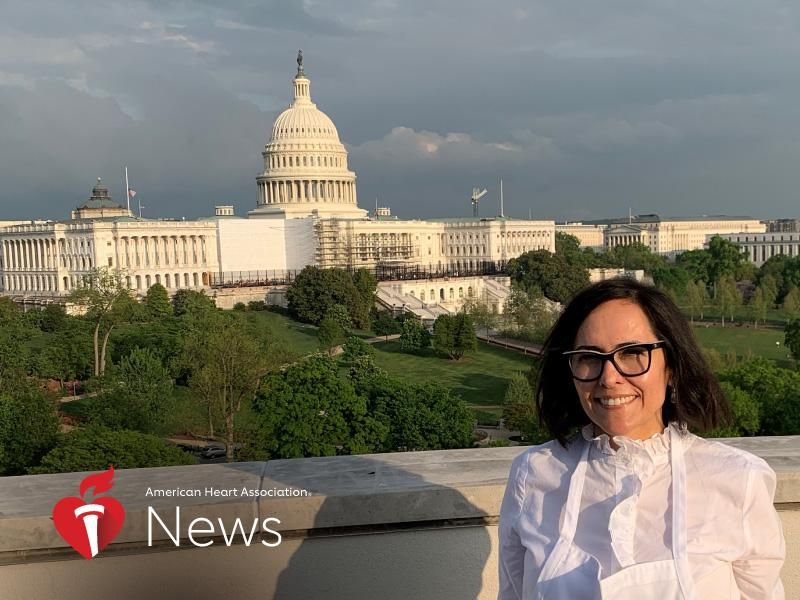 WEDNESDAY, Nov. 23, 2022 (American Heart Association News) — It was a Wednesday morning last October and still dark when Delya Sommerville took off for a run with her jogging club.

They usually went out two to three times a week in the Capitol Hill area of Washington, D.C., and ran for about an hour. On this day the focus was hills.

“I don’t feel very strong today,” she said to one of her running friends.

Before long, Delya lagged behind. She knew the route and kept going at her own pace. When she neared the south barricade of the U.S. Capitol building, Delya collapsed.

Moments later, U.S. Rep. Vicky Hartzler of Missouri – who happened to be out for her own morning run – spotted Delya on the pavement. She called the U.S. Capitol Police.

Responders found Delya not breathing and without a pulse. She’d gone into cardiac arrest.

Soon after, D.C. fire department and EMS crews arrived. They transferred Delya to a hospital that specializes in treating heart patients.

At about 6:45 a.m., just before his alarm was set to go off, Patrick Sommerville was awakened by a call.

The caller identified himself as Sgt. Corey Rogers with the Capitol Police.

“I need to inform you that your wife was found not breathing on the grounds of the U.S. Capitol,” he said. “She’s been revived and was taken to the hospital.”

He sounded businesslike, but then added a warmer note that Patrick will always appreciate: “A very experienced rescue officer said she was saved quickly enough and will pull through.”

At the hospital, Patrick found Delya intubated and hooked up to several machines. Doctors asked him about her heart history.

All he could tell them was that she had passed out while running five months earlier. Doctors suspected it was caused by dehydration. Nonetheless, Delya had decided to get a full cardiac checkup. Her cholesterol was elevated, but no heart problems were detected. She started taking statins to lower her cholesterol and returned to running in late July. She’d had no other problems. Until now.

Delya spent two nights in the ICU before gaining consciousness. Doctors had warned Patrick that the loss of oxygen might affect her cognitive skills.

When she woke up, Delya didn’t remember anything about the day. She insisted she hadn’t been running.

Patrick asked if she knew her name and where she lived.

“I know what my name is, so stop asking me,” she said, using an exasperated tone that let Patrick know her cognitive skills were sharp as ever.

Doctors found that Delya had a problem called triple vessel coronary disease. As the name implies, it means that three major arteries in the heart are blocked with plaque. Because of that, running irritated her heart muscle, resulting in cardiac arrest.

Delya was told she would need coronary artery bypass surgery.

She struggled to process the news. She had gone from a seemingly healthy runner to needing open-heart surgery.

The surgery went smoothly. Before leaving the hospital, Delya was fitted with an external defibrillator jacket. Doctors told her it was like a life vest, just in case.

“That was the most challenging part, because we’d thought we were out of the woods,” Patrick said. “If they’re doing that, they’re not entirely confident her heart wouldn’t just shut off.”

For a month, Patrick made sure Delya was never alone. At night, he would wake up every 20 minutes to make sure she was breathing.

After two months, doctors said she no longer needed to wear the vest.

“You are my heroes,” she told them during the ceremony. “We will never be able to thank you enough.”

“Being in a safe area and monitored and being surrounded by professionals when I started pushing myself was key for me,” she said. “The mental part of starting back to exercising was huge.”

Now, just over a year since her cardiac arrest, Delya is comfortable with exercising in a controlled environment, like at a gym, where she runs on a treadmill.

“Physically I feel fine, but I worry about every single twitch in my body,” she said. “That’s difficult because you don’t know if it’s physical or mental.”

“Anything that amplifies her heart rate, even like anxiety, I start to get nervous,” he said.

The family recently moved to Addis Ababa, Ethiopia, for Patrick’s work, a move that Delya signed off on.

Even from afar, Delya will continue her newfound passion – promoting and advocating for bystander CPR as well as promoting awareness about women’s heart issues.

“Usually when women have a cardiac event, it comes as a shock,” she said. “There needs to be more research and money for women. I have an opportunity to advocate for policy. I’m a real-life example.”