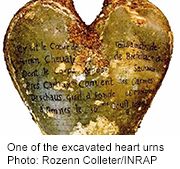 “My heart will go on” may be more than a line from a song: Researchers say they’re learning more about the history of heart disease from spousal hearts buried with loved ones centuries ago.

The hearts — encased in decorative, heart-shaped urns — were buried about 400 years ago in France.

“It was common during that time period to be buried with the heart of a husband or wife. This was the case with one of our hearts. It’s a very romantic aspect to the burials,” study author Dr. Fatima-Zohra Mokrane, a radiologist at the University Hospital of Toulouse, France, said in a news release from the Radiological Society of North America (RSNA).

As described by the researchers, the several burial vaults in the basement of the Convent of the Jacobins in Rennes date back to the late 16th or early 17th century. The vaults were excavated by France’s National Institute for Preventive Archaeological Research and were found to contain five urns with preserved hearts.

Mokrane’s team scanned the centuries-old hearts using MRI and CT. The process was difficult, she said, because materials used to embalm the hearts needed first to be painstakingly removed. Then, her team “rehydrated” the dried-out cardiac muscle.

“Since four of the five hearts were very well-preserved, we were able to see signs of present-day heart conditions, such as plaque and atherosclerosis [hardening of the arteries],” Mokrane said.

One heart had no signs of disease, three had evidence of coronary artery disease, and the fifth was in too poor shape to be studied.

The inscription on one urn said the heart belonged to Toussaint Perrien, Knight of Brefeillac. His heart had been removed after his death and later buried with his wife, Louise de Quengo, Lady of Brefeillac, whose body was found on the site.

The study was presented Dec. 2 at the RSNA’s annual meeting in Chicago.

The U.S. National Institutes of Health explains how to reduce your heart risks.